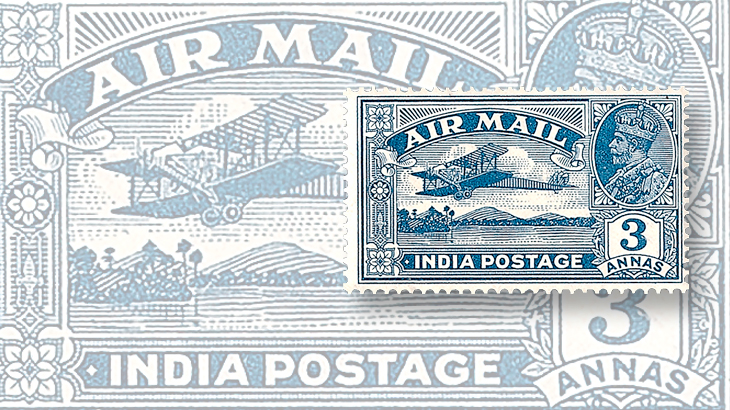 India’s first airmail set (Scott C1-6) is in demand and a good buy in both unused hinged condition and mint never-hinged condition at the 2016 Scott Standard Postage Stamp Catalogue values.

Formerly the Jewel in the Crown of the British Empire, today India appears to be on the threshold of becoming one of the world’s great powers.

United from a series of rival and often warring minor kingdoms over a period of two centuries, India gained its independence from the British Empire in 1947.

India is popular with many collectors worldwide, especially among British Empire collectors and members of the Indian diaspora.

Stamp collecting in India has grown as many people became more affluent and could afford to collect.

The stamp design features an inset portrait of King George V, while the vignette depicts a DeHavilland Hercules biplane flying the mail above a lake with mountains in the background.

This classic and colorful set is popular with aviation topical collectors as well as with country and British Empire collectors. The 2016 Scott Standard Postage Stamp Catalogue values the set in unused hinged condition at $34.65 and in mint never-hinged condition at $60. It is a good buy at those prices. Be sure to avoid examples with toned gum.