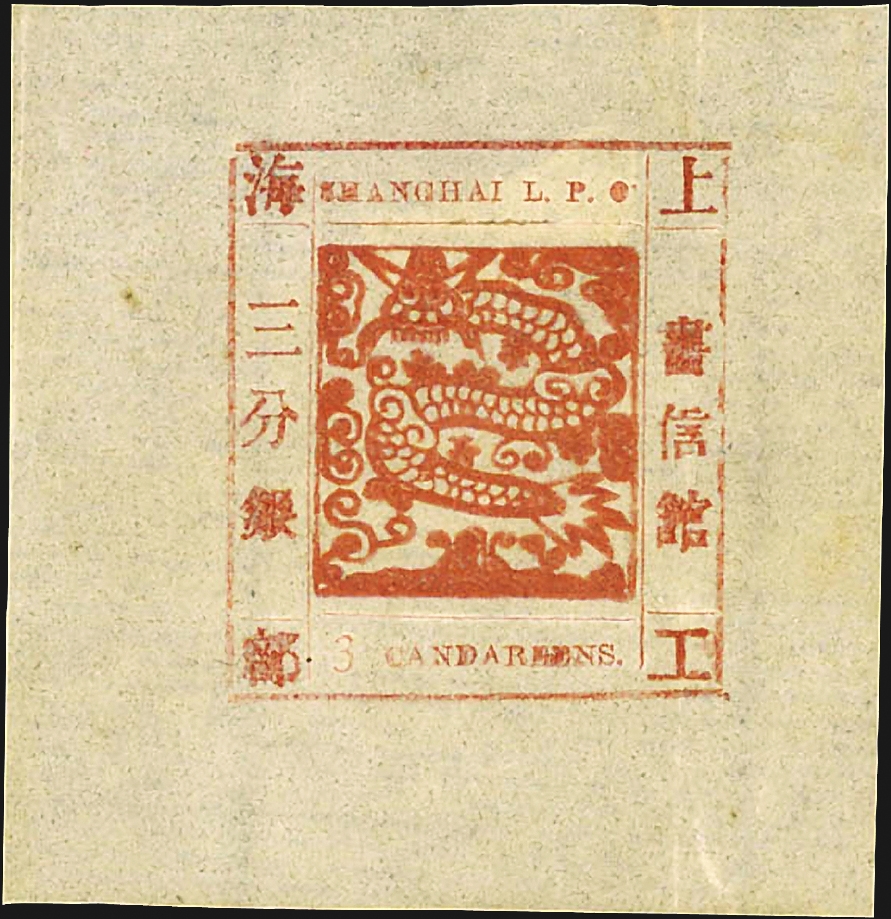 This Shanghai 3-candareen stamp with huge margins is the finest example known of the very few unused examples that exist. It sold for about $96,400 in the May 22-23 Kelleher & Rogers auction in Hong Kong.

The three blocks of China Scott 6, the 5-candareen orange-yellow “Large Dragon” stamp of 1882, comprising the Lady Cotswolds Missionary Find. All three blocks sold as a single lot during the May 22-23 Kelleher & Rogers auction in Hong Kong for approximately U.S. $927,000.
Previous
Next

Three rare, large blocks of early Chinese stamps that surfaced a few months ago in an English attic after lying hidden for more than a century were auctioned May 22 in Hong Kong by the firm of Kelleher & Rogers, Ltd. for close to $1 million.

Calling it “one of the best sales across the board in recent memory,” Kelleher & Rogers president Laurence Gibson hailed the results of the two-day sale of Chinese and East Asian stamps and covers as having exceeded even his own optimistic hopes.

“It was just a matter of everything lining up and the right people being there,” he said, adding that an extraordinary 98 percent of the lots sold.

Dubbed the “Lady Cotswolds Missionary Find,” the block of 19, block of 10 and block of six of China’s 5-candareen orange-yellow “Large Dragon” stamp of 1882 (Scott 6), printed on thin paper with the stamps set 4½ millimeters apart in the sheet, were discovered stashed in old church-donation envelopes stored in a cigar box in the attic of a home in south-central England.

An unused single of Scott 6 is valued at $16,000 in the 2015 Scott Classic Specialized Catalogue of Stamps and Covers 1840-1940. Only three other multiples are known: a unique full sheet, which sold for over $1 million and now resides in a private collection in China; a block of eight; and a pair.

The full story of how the three blocks were discovered and came to market was given in detail in Linn’s issue of March 9; their upcoming sale was announced on the May 25 front page.

In the meantime, Gibson had inspected the blocks closely, verifying their plating, shade of color and condition of the paper.
“You never know where something will turn up,” Gibson said. “Being involved with a discovery like this is so exciting. You work your whole life hoping for something like this.”

Gibson said he knew the best place to offer the blocks would be in Hong Kong. The firm required bidders interested in the blocks to put up a deposit in advance of the sale to verify their bona fides. Four bidders did so.

Gibson said he had hoped the bidding might go up another notch or two; as it turned out, the competition restarted and the combined lot was finally knocked down for HK$6.25 million.

With the 15 percent buyer’s premium that Kelleher & Rogers adds to all lots, the total for the three blocks came to about $927,000 in U.S. dollars.

Gibson said the winning bidder was a “well-known young collector” from mainland China. The underbidder was a Hong Kong collector and the third-place bidder was from Taiwan, underscoring the wide appeal of the rarities.

The Lady Cotswolds Missionary blocks were just one of several notable items in the two-day sale, which drew about 1,100 bidders, according to Gibson, including a total of about 200 individuals on the “packed” floor of the auction room and hundreds more on the phone and Internet.

Gibson noted cheerfully how each section of the sale drew distinct groups of bidders.

After the section featuring Chinese classics concluded, “the room emptied out and refilled with a mainland crowd” who came to bid on stamps of the People’s Republic of China (1949-present).

The mainland bidders were “shouting, talking on their phones,” Gibson recalled. “When the P.R.C. was done, the room emptied again and the Hong Kong crowd came in, very quiet and polite.”

Among other highlights was a rare stamp of the Shanghai Local Post, a foreign-run precursor to the Chinese Imperial Post. Shanghai issued its first stamps in 1865.

Various papers and fonts were used, and the printers seemed unable to decide if the currency, the candareen, should be singular or plural.

Gibson said he knew the example in his sale was a nice one, but despite describing it as “magnificent, flawless” and in a “splendid ‘terra cotta’ shade,” he didn’t want to overestimate its value.

But “two phone bidders started going after it, and they wouldn’t give up.” The stamp ended up selling for about $96,400.

Gibson said he found out afterwards that it is indeed the finest example known. He added that the consignor, a longtime collector living in California, had probably inherited the stamp from his father, making this its first appearance at auction in many decades — or possibly ever.

Full results of the sale, along with a downloadable auction catalog can be found at Kelleher's website.