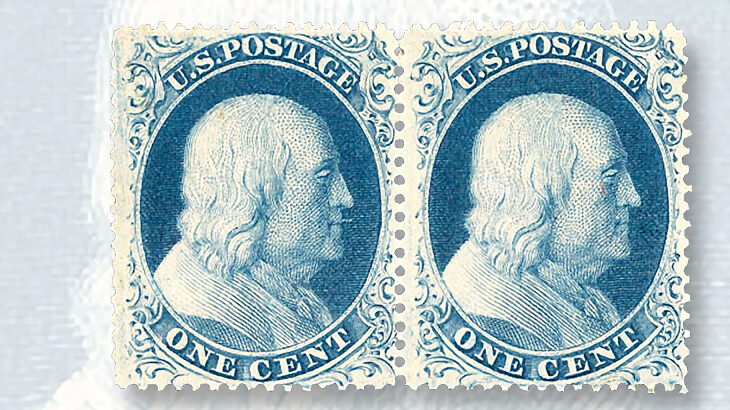 This unused pair of the United States 1857 1¢ blue Benjamin Franklin perforated issue includes both the type III variety at left and the type IIIa stamp at right. It will be offered by Daniel F. Kelleher Auctions of Danbury, Conn., during the firm’s Aug. 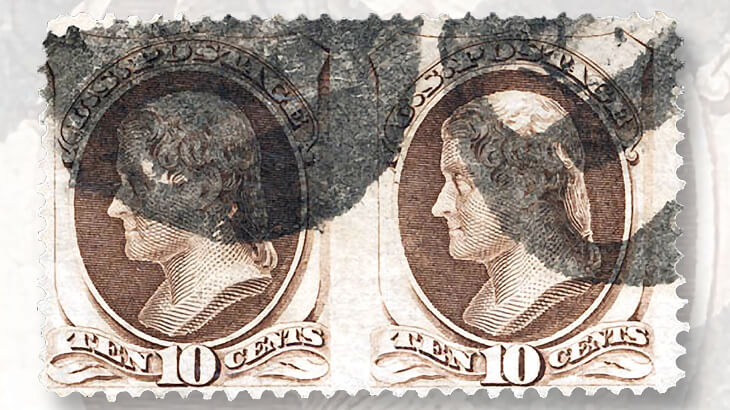 This used imperf-between pair of the United States 1873 10¢ brown Thomas Jefferson stamp will be offered during the upcoming Kelleher auction. This is the only known example of the variety.
Previous
Next

Daniel F. Kelleher Auctions will offer its Flagship sale over the course of three days, Aug. 30-Sept. 1, at the firm’s offices in Danbury, Conn.

The public auction will feature United States and worldwide stamps and postal history, with items from the William Weiss Jr. postal cards collection, classic U.S. stamps and more recent varieties, British Empire including Canada and Indian States, and much more.

One handsome highlight of this sale is a horizontal pair of the United States 1857 1¢ blue perforated issue that includes types III and IIIa (from left to right, Scott 21 and 22).

Both stamps on their own are sought-after collectibles but the type III left stamp with broken curved frame line at both top and bottom is the more scarce, valued at $17,500 unused in the 2016 Scott Specialized Catalogue of United States Stamps and Covers, with the value in italics to signify an item that can be a challenge to value accurately.

The type IIIa (described by Scott as “Similar to III with the outer line broken at top or, rarely, at bottom but not both”) carries a $2,400 unused value in the Scott catalog.

Scott also makes a point to value the horizontal pair that includes a type III with IIIa, like this one, and assigns it a value of $22,500 in italics.

The pair in this auction is accompanied by Philatelic Foundation certificates from 2008 and 2014.

Described by Kelleher as “among the choicest obtainable examples deserving placement in a collection of distinction, Very Fine,” the unused pair is given an estimated value of $15,000 to $20,000, and is listed with an opening bid of $7,500.

Another pair of U.S. classics, this one used, is described as unique in the Scott U.S. Specialized catalog, a fact noted also by Kelleher.

The 1873 10¢ brown Thomas Jefferson from the Continental Bank Note Co. printing is offered as the unique horizontal pair, imperforate between (Scott 161d).

“It is the only known example of a Bank Note issue imperf between, other than the 3¢ Continental and the 2¢ Special Printing of 1883,” Kelleher notes.

The stamps are each struck with a cork cancel and are described as very fine with a negligible corner crease at bottom left.

One of America’s modern stamp puzzlers is the H-rate Hat postcard rate stamp with yellow background, often referred to simply enough as the Yellow Hat stamp.

The stamp was printed for a 1998 rate change but never officially issued by U.S. Postal Service authorities. Nonetheless, examples began turning up the following year, some clearly used on mail and postmarked, and others in mint condition.

The Yellow Hat stamp is not listed in the Scott U.S. Specialized catalog, but it is pictured with a note that says the used stamp has a value of $2,250.

The three-day auction offers 1,569 lots of U.S. stamps, postal history, possessions and other back-of-the-book material, followed by more than 820 lots of foreign material.