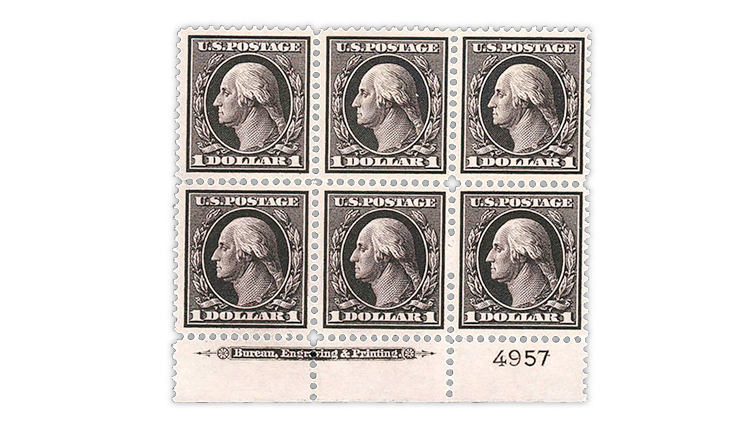 Upcoming auctions from Daniel F. Kelleher include United States and worldwide stamps and postal history. This plate block of six of the U.S. 1909 $1 violet brown George Washington stamp will be featured in the Aug. 13-15 sale.

The U.S. stamp lots include a used example of the 1845 5¢ black on greenish St. Louis Bears postmaster’s provisional stamp (Scott 11X1), and continue through the late 20th century with back-of-the-book stamps, revenues and possessions.

Collectors of U.S. plate blocks will have an opportunity to bid on a bottom margin plate block of six of the 1909 $1 violet brown George Washington (Scott 342). The block is described as previously hinged with deep rich color and impression, and nicely matched borders that form a compelling multiple. Kelleher notes that 12 examples are recorded, and this one is accompanied by a 2018 certificate from Professional Stamp Experts.

The British Commonwealth material includes a substantial amount of Prince Edward Island postal history, and a handsome 1894 Canada cover mailed from Toronto to Skive, Denmark, franked with 10 ½¢ Small Queen stamps (Scott 34): a single, a strip of four and a strip of five.

The auction also includes a rarity from China often identified as one of the “Four Treasures of the Republic.”

It is China’s 3¢ blue green Junk stamp, originally issued in 1915 as part of the first Peking printing, then surcharged in red in 1922 to create the 2¢-on-3¢ stamp. The example in the Kelleher auction is the rare variety with inverted surcharge (Scott 247a).

Two individual catalogs have been prepared for the auction series and can be viewed online, with online bidding options available.