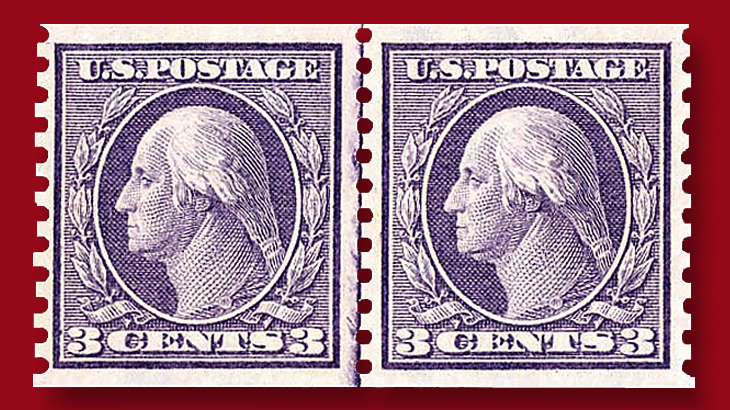 A scarce never-hinged line pair of the 1916 3¢ violet George Washington horizontal rotary press coil stamp will be auctioned at the Kelleher sale. 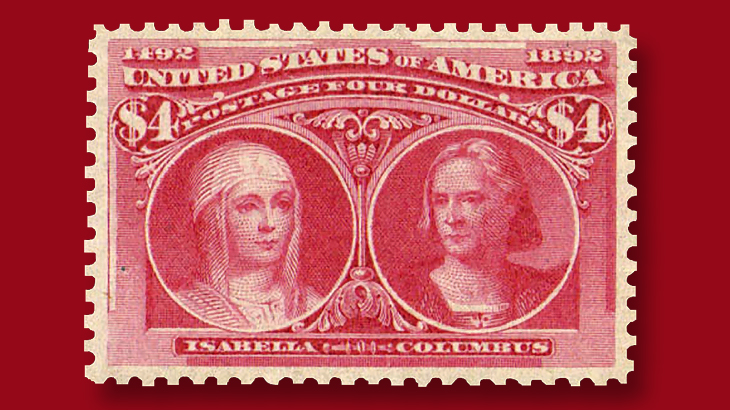 The upcoming flagship series auction from Daniel F. Kelleher Auctions will take place Feb. 27 to March 2. The sale features United States, British Commonwealth and worldwide material, with more than 3,400 lots to entice prospective bidders over the course of the four-day sale.

The auction opens Tuesday morning with the international material, beginning with more than 320 lots of British Commonwealth.

This section includes a strong showing of Canada and provinces, with a run of the 1897 Jubilee stamps and a number of 20th-century commemoratives in imperforate pairs. A never-hinged horizontal pair of the 1929 50¢ blue Bluenose stamp (Scott 158b), one of an estimated 250 imperforate pairs produced of this popular and attractive design, is offered by Kelleher with an opening bid of $250 against the $1,150 value listed in the 2018 Scott Classic Specialized Catalogue of Stamps and Covers 1840-1940.

The U.S. stamps are offered as singles and various multiples on Wednesday, followed by blocks and plate blocks on Thursday.

The largest known multiple of the 1869 24¢ green and violet Declaration of Independence stamp (Scott 120) is included in this Kelleher auction.

The hinged block of nine stamps is unused with original gum. It is identified in the auction catalog as ex-Worthington, Lozier, Sinkler, Gibson, Klein, Forster and Lafayette (Walske).

The next largest multiple of the 24¢ is a block of four, according to Kelleher.

The 1893 Columbian commemoratives are well represented, with some top-graded single stamps, plate strips and plate blocks, larger blocks and even never-hinged full panes.

A never-hinged single of the $4 crimson lake Columbian (Scott 244) is offered with a certificate grading of Extra Fine-Superb 95, one of only five examples to achieve that high grade from Professional Stamp Experts, according to Kelleher, and currently the highest-graded example on the PSE population report.

Kelleher describes the stamp as an out-of-this-world gem in a remarkable state of preservation, with a tremendous crimson lake shade.

The sale also includes a considerable number of 20th-century singles and multiples from the Washington-Franklin series.

Among these is a never-hinged joint line pair of the 1916 3¢ violet George Washington horizontal rotary press coil (Scott 456).

The Friday session offers more than 400 lots of U.S. airmail and other back-of-the-book, revenue stamps, possessions and more.