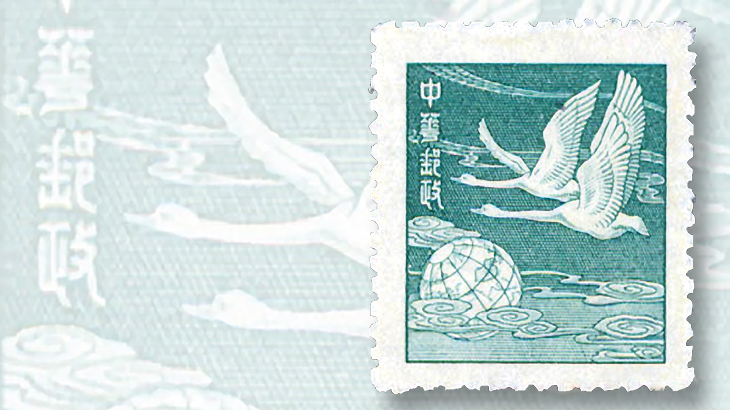 An unissued green variety of China’s 1949 Flying Geese Over Globe silver yuan stamp without denomination is among the offerings of China and Asia stamps and postal history in the June 11-12 Kelleher and Rogers auction in Hong Kong.

The next public auction from Kelleher and Rogers will feature China, Hong Kong, Japan and other Asian stamps and postal history.

The auction will take place June 11-12 at the Kelleher and Rogers offices on the ninth floor of the Malaysia Building, 50 Gloucester Road, Wan Chai, Hong Kong.

Among the offerings is a complete unused set comprising blocks of four of the 1897 new currency surcharges with large numerals, wide surcharges, on the second printing of the Dowager set (Scott 47-55).

The blocks are described by Kelleher and Rogers as having full clean original gum that is generally very lightly hinged.

The Empress Dowager set is also represented on an 1895 registered cover from Chefoo to London that is franked by the complete set of stamps, plus two 25-centime “CHINE” French Offices adhesives (one with faults).

Along with the Shanghai cancels and Chefoo seals on the front, the cover is struck with a Chefoo Customs origin circular datestamp, a red boxed “R” marking, and a red Registered London receiving cancel. The flap shows an embossed “Custom House/Chefoo” chop, and on the back is a Shanghai Customs transit marking and a British registered arrival marking in black.

The Saturday session also features an intriguing example of the unissued 1949 Flying Geese Over Globe silver yuan stamp, Dah Tung printing, in green with no denomination, without gum.

The auction catalog description for this stamp states: “A simply magnificent example of a great Chinese rarity of which only about seven examples are believed to be in private hands. While most known examples suffer from various aspects of aging and various perforation flaws, etc., this example is beyond belief, offering outstanding centering, with full, intact perforations printed on fresh stark white paper, in true ‘Post Office’ quality; choice, most likely the finest example in existence.”

The Sunday session also begins at 10 a.m., and consists of issues of the People’s Republic of China, including Liberated Areas and collection lots.

The popular 1962 Mei Lan-fang set is represented in this auction with complete sets of the single stamps (Scott 620-627) and sets of those stamps imperforate (which the Scott catalog describes and values in a note).

The auction also offers the $3 Mei Lan-fang souvenir sheet (Scott 628) with four mint examples, plus one offered on an unaddressed cacheted first-day cover.

Interested collectors can view the entire auction online, with live bidding during the auction via Stamp Auction Network (advance registration is required).