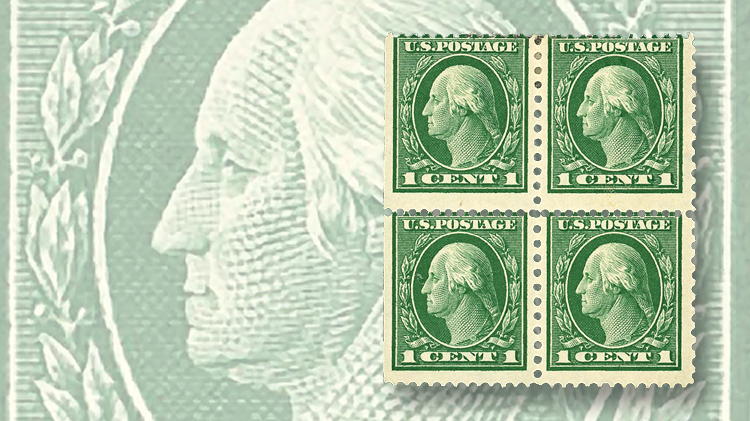 This unused block of four of the U.S. 1914 1¢ George Washington with compound gauge 12 by 10 perforations will be auctioned during the Dec. 8-10 Daniel F. Kelleher Flagship Series auction.

A 20th-century United States rarity is one of the featured items in the Daniel F. Kelleher Flagship Series auction taking place Dec. 8-10 at the firm’s galleries in Danbury, Conn.

The unused block of four of the 1914 1¢ green George Washington stamp with compound gauge 12 by 10 perforations (Scott 423A) is among the U.S. material heading for the auction block.

These stamps were printed and processed during a time when the Bureau of Engraving and Printing was gradually changing from gauge 10 perforations to gauge 12. During that period of the changeover, some of the lower denomination definitive stamps were perforated gauge 10 in one direction and gauge 12 in another (Scott 423A-423C at perf 12 by 10, and 423D-423E at perf 10 by 12).

The unused block in the Flagship Series sale has its original gum, with the top stamps showing a hinge remnant. The bottom stamps are never hinged with pencil notations, according to the auction catalog description.

The stamps are centered to the top (the top stamps each have a tiny thin), and the block has a natural straight edge at left.

The block is accompanied by a 2015 Professional Stamp Experts certificate.

The 2016 Scott Specialized Catalogue of United States Stamps and Covers lists but does not provide a value for an unused block of four. The value for four original gum singles totals $60,000; this block is offered by Kelleher with an estimate of $20,000 to $30,000, and an opening bid of $10,000.

Among the worldwide stamps on offer is a 20th-century British Commonwealth rarity, the Cayman Islands 1907 surcharged 1-penny on 5-shilling salmon on green King Edward VII stamp with double surcharge (Scott 19a), one of just six examples recorded.

The unused stamp is described by Kelleher as fresh and well-centered with original gum. It is accompanied by a 1933 B.P.A. expertizing certificate.

The value listed for the double surcharged stamp in the 2016 Scott Standard Postage Stamp Catalogue is $22,500 in italics, indicating that it is an item that is difficult to value accurately. Kelleher estimates this stamp at $15,000 to $20,000, with an opening bid of $7,500.

The Kelleher Flagship Series auction can be viewed at Kelleher's website; online bidding is available.