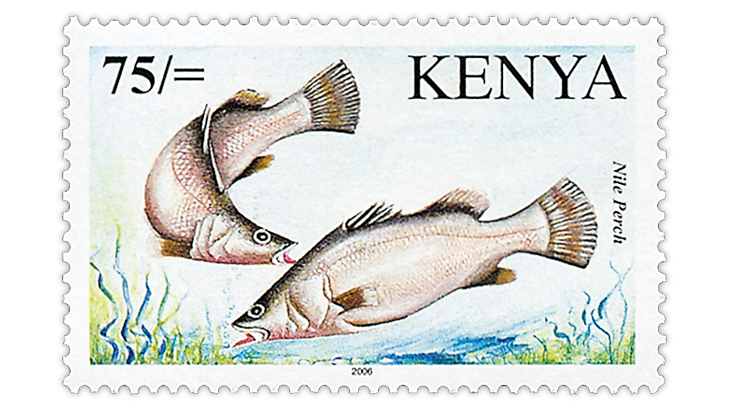 Kenya is located on the east coast of Africa, bordering South Sudan, Somalia, Ethiopia, Uganda and Tanzania. It has about 300 miles of coastline on the Indian Ocean,

American interest in Kenya has been on the rise since the election of President Barack Obama, whose father was Kenyan.

On May 4, 2006, Kenya issued a set of four stamps featuring freshwater fish of Lake Victoria (Scott 789-792). When issued, the set was not well publicized or widely distributed.

The Scott Standard Postage Stamp Catalogue does not value the individual stamps or the set. The catalog shows dashes for each of the four stamps in used condition. For mint stamps, it only shows dashes for the two middle denominations, the 55 shillings and 75sh, with the value left blank for the 25sh and 95sh stamps.

This set is desired by many fish topical collectors. It is a difficult set to find, and demand far outstrips supply. If you want it and can find it offered, expect to pay $130 to $160 for a set in mint never-hinged condition.

We have not seen a used set or any used singles sold or offered for sale, but we expect that they aren’t cheap.