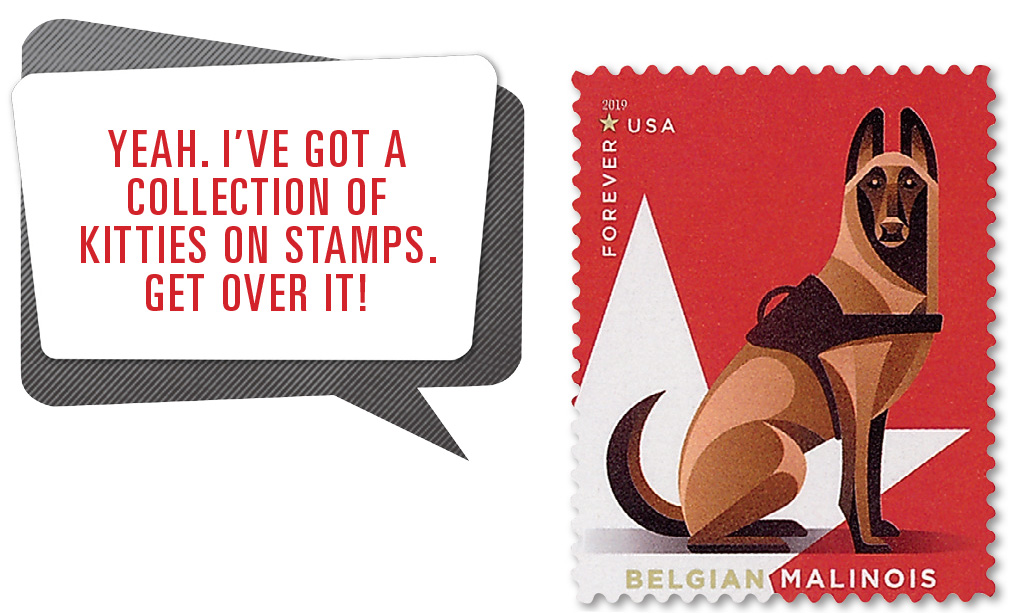 The winner of the philatelic part of the December cartoon caption contest using the Belgian Malinois stamp from the 2019 Military Working Dogs block of four is Reid Hinson of Kill Devil Hills, N.C., who softens the dog’s image. The next cartoon caption c

The Belgian Malinois stamp (Scott 5407) from the 2019 Military Working Dogs block of four was the cartoon caption contest stamp for December. That dog inspired many Linn’s readers to think of other named connections to Belgium.

David Vikan of Dickinson, N.D., represents this group with the Belgian Malinois saying: “Forget the Kibbles, give me Belgian Waffles! And don’t forget the maple syrup.”

Rosemary Harnly of Red Wing, Minn., used a different definition of waffle with “I don’t waffle on sniff test assignments.”

Other entries had the Belgian Malinois working for the U.S. Postal Service.

David Epps of Portland, Ore., borrows the unofficial USPS motto to make this connection, “Neither snow nor rain nor heat nor gloom of night stays THIS courier from the swift completion of his (actually, her) appointed rounds.”

The philatelic line winner, from Reid Hinson of Kill Devil Hills, N.C., portrays a softer side of the military working dog.

The winner of the nonphilatelic part of the contest borrowed the famous philosophical question from William Shakespeare’s Hamlet. It comes from Thomas Ream of Spring Grove, Penn., who has the dog thinking, “To bite or not to bite, that is the question!!”

“Pay no attention to the background color. I’m Belgian, not Russian!” from Alan McCleaf of Fredericksburg, Va.

“It just dawned on me. I’m signed up for 4 years, but that’s 28 dog years, and I don’t have a retirement plan,” by Ray Cartier of Arlington, Texas.

“I hate it when people ask me if I’m from Belgium, Illinois,” by George Schaetzle of Sheboygan, Wis.

“Feeling lucky, punk? Go ahead and lick me,” by Lawrence Sherman of San Diego, Calif.

“I don’t want to end up like Owney!” from Laura and Tom Tomaszek of Cedar Rapids, Iowa.

“I’m running for Pupmaster General of the USPS!” by Steve Kotler of San Francisco, Calif.

Thanks and a tip of the hat to all who entered. The next contest will be announced in the Feb. 10 issue of Linn’s.