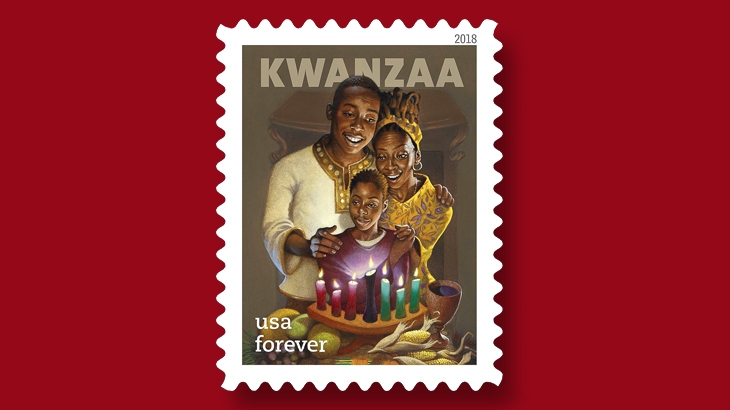 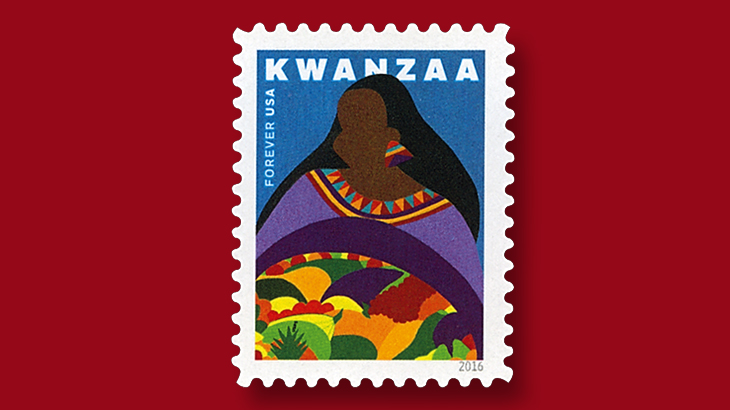 A 2016 United States Kwanzaa forever stamp with a design by Synthia Saint James is also available from U.S. Postal Service outlets.
Previous
Next

The celebration of Kwanzaa and its unifying principles of family, community and culture are featured on a new United States forever stamp being issued Oct. 10.

The illustration on the non-denominated (50¢) Kwanzaa stamp shows a family of three appreciating symbols of the annual holiday, including a candleholder called a kinara and a unity cup called kikombe cha umoja.

The artwork by Floyd Cooper depicts a man, woman and child wearing a mixture of western and traditional clothing, gathered before a table covered with a straw mat that holds the seven lit candles of the kinara, various fruits and vegetables including three ears of corn, and the unity cup.

Cooper used a method he calls “oil erasure” to create the painting, according to the U.S. Postal Service. The USPS described the method as “covering an illustrated board in oil paint and then erasing layers of paint to reveal his images.”

Banknote Corporation of America is printing the stamps and processing them in panes of 20.

The most recent Kwanzaa stamp was issued Oct. 1, 2016, with a design by Synthia Saint James, who also illustrated the first U.S. Kwanzaa stamp.

That 2016 forever stamp (Scott 5141) marked the 50th anniversary of the holiday and remains on sale from some USPS outlets.

“Created in 1966 during the height of the Black Freedom Movement, Kwanzaa was conceived as a unifying holiday during initiatives to end racial oppression in the United States,” according to the Postal Service. “It draws on African traditions, deriving its name from the Swahili phrase ‘matunda ya kwanza,’ meaning ‘first fruits.’ With origins in Africa’s ancient and modern first-harvest festivities, Kwanzaa synthesizes and reimagines many of these communal traditions as a contemporary celebration and reaffirmation of African-American culture.”

Kwanzaa gift-giving traditions are described on the website www.officialkwanzaawebsite.org: “Gifts are given mainly to children but must always include a book and a heritage symbol. The book is to emphasize the African value and tradition of learning stressed since ancient Egypt, and the heritage symbol to reaffirm and reinforce the African commitment to tradition and history.”