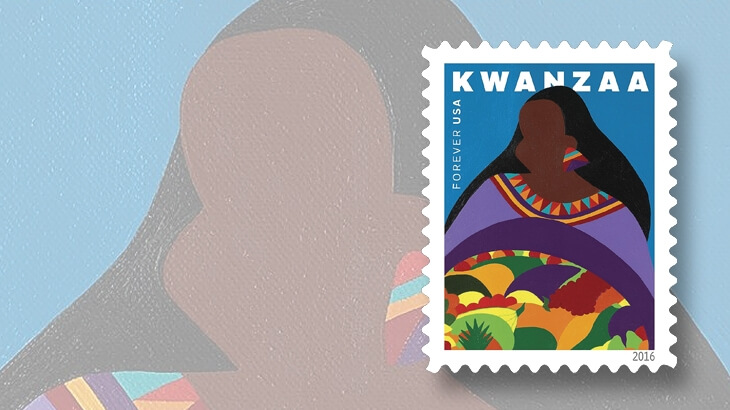 A new forever stamp celebrating the Kwanzaa holiday will be issued Oct. 1, with a 12:30 p.m. first-day ceremony in Charleston, S.C. 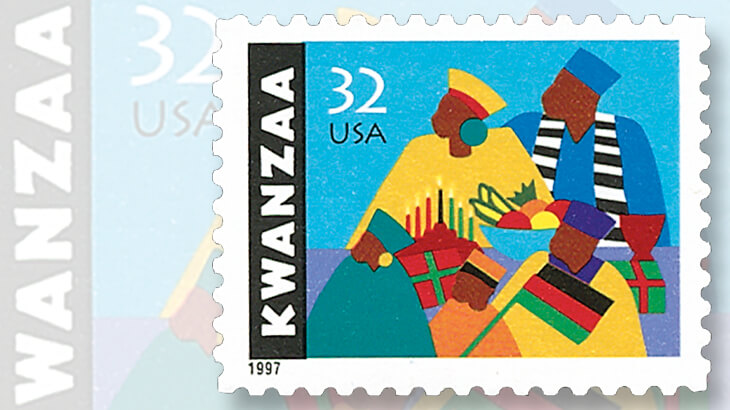 Synthia Saint James illustrated the 32¢ Kwanzaa stamp issued in 1997, and also created the artwork for the 2016 Kwanzaa forever stamp.
Previous
Next

A new Kwanzaa forever stamp from the United States Postal Service marks the 50th anniversary of the first celebration of the Kwanzaa holiday.

A festive nonreligious celebration of family, community, culture, and prosperity, Kwanzaa was established by Maulana Karenga in 1966 and is based on African first-harvest traditions.

”Kwanzaa synthesizes and reinvents these tribal traditions as a contemporary celebration of African-American culture,” according to the Postal Service.

In 2008, poet and author Maya Angelou described Kwanzaa as a time for gathering in the spirit of family and community, “to celebrate life, love, unity, and hope.”

The name of the holiday derives from the phrase “first fruits” in Swahili.

The new stamps will be issued in a pane of 20. Along with the pane, the Postal Service will also offer the Kwanzaa stamp in die-cut press sheets consisting of eight panes (160 stamps) through its Stamp Fulfillment Services division.

The press sheets will sell for face value at $75.20. The number of press sheets available for purchase has not been revealed.

The first-day ceremony for the new Kwanzaa forever stamp will take place Oct. 1 at 12:30 p.m., in Marion Square, 329 Meeting St., in Charleston, S.C., during the 33rd annual MOJA Arts Festival: A Celebration of African-American and Caribbean Arts. The festival runs from Sept. 29 through Oct. 9.

Artist Synthia Saint James created the illustration for the new stamp, which depicts a woman holding a large purple bowl filled with fruits and vegetables, symbolizing the abundance of African first-harvest celebrations.

“She wears a lavender dress with a collar of African design that also appears in her earring,” the Postal Service notes.

Her illustration of the very first U.S. Kwanzaa stamp, issued Oct. 22, 1997, with a 32¢ denomination (Scott 3175), features a family of four in colorful robes with a bowl of harvested fruits and vegetables; a flag with black, red and green stripes; a wrapped gift; and a candelabra with seven candles, known as the mishumaa saba and representing the seven principles of Kwanzaa and the seven days of the holiday.

The symbolic candles feature prominently on the most recent Kwanzaa forever stamp, which was illustrated by R. Gregory Christie and issued Nov. 26, 2013 (Scott 4845).

Technical details for the new Kwanzaa special forever stamp and first-day cancel ordering information are presented below, along with a list of the 12 different Kwanzaa stamps issued by the U.S. Postal Service.

Collectors requesting first-day cancels are encouraged to purchase their own stamps and affix them to envelopes. The first-day cover envelopes should be addressed for return (a removable label may be used), and mailed in a larger envelope addressed to Kwanzaa Stamp, Stamp Fulfillment Services, Cancellation Services, 8300 NE Underground Drive, Pillar 210, Kansas City, MO 64144-9998. Requests for first-day cancels must be postmarked by Dec. 1.

The Postal Service’s uncacheted first-day cover for the Kwanzaa stamp is USPS item No. 586616 at 91¢. USPS order numbers for stamps and FDCs also appear in Linn’s 2016 U.S. Stamp Program.