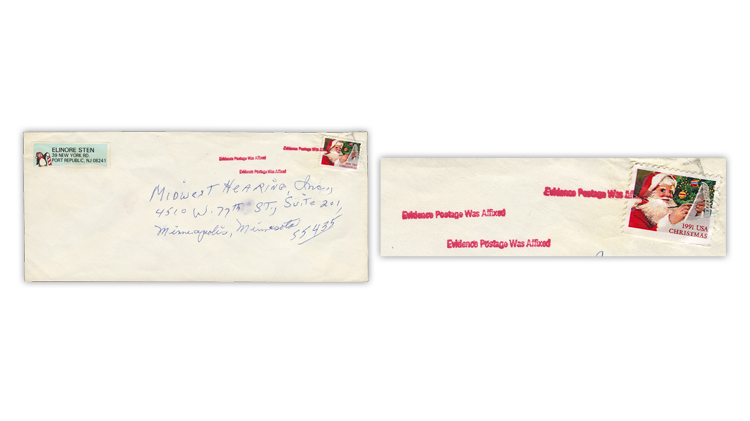 When a stamp with no stated value looks like a colorful nonpostage label, it should not be a surprise when a United States Postal Service employee rejects it as invalid for postage, as was the case with this 1991 Christmas stamp. A nixie clerk handstamped

I have maintained for years that the U.S. Postal Service has made it very difficult for its employees to be able to verify its own products. Figure 2 shows an example that is especially relevant during the Christmas season.

What has the Postal Service done? First, it abandoned intaglio printing. Second, it issues upwards of 100 attractive multicolored stamps each year. Third, it has released many stamps over the years with no obvious face value, or with the denomination included in such a minor way that it takes a magnifier to find it.

The Figure 2 cover is franked with a Christmas stamp (Scott 2582) that was issued Oct. 17, 1991. The stamp depicts Santa checking his list, but there is no denomination or service inscription on it.

Since the first-class rate had been set at 29¢ effective Feb. 3, 1991, that is the denomination that should have been placed on Christmas stamps for 1991. However, the Postal Service had lodged a protest of the decision to set the rate at 29¢, with the objective of having it overturned in favor of the 30¢ rate it had requested.

When it was time to decide what denominations to print on the 2 billion stamps needed for the 1991 holiday season, there had been no decision on the protest. So, the U.S. Postal Service had the stamp designed with the text “1991 USA Christmas,” but no face value. By the time the stamps were issued in October, the Postal Service’s protest had been disallowed, and it had been decided that the 29¢ rate would prevail.

These colorful gravure Christmas stamps confused some in the Postal Service. Despite internal publicity telling employees that the value was 29¢, some inevitably didn’t get the word.

In the case of the Figure 2 cover, one such employee did not recognize the stamp as valid postage, let alone as paying the correct rate. So, the cover was sent to the nixie clerk either to verify its authenticity as a U.S. stamp, or to process it for return to sender.

The clerk approved the stamp and applied the handstamp “Evidence Postage Was Affixed” before reinserting it in the mailstream. The proper handstamp would have been “Valid Postage Verified.” But why quibble; the letter went on its way.