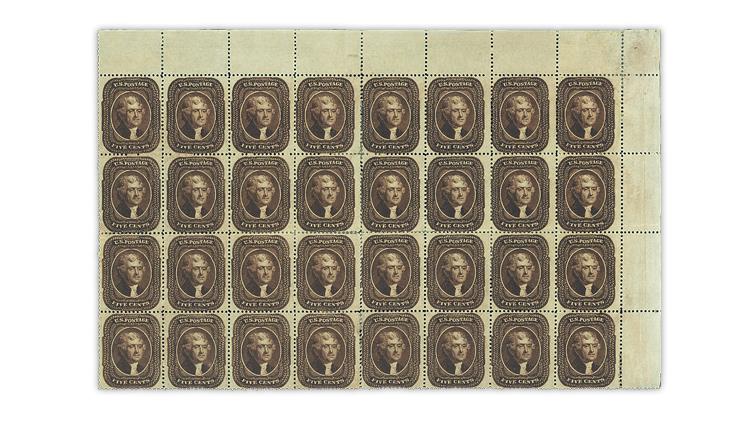 A highlight of Daniel F. Kelleher Auctions’ Oct. 28-30 sale of part 1 of the William S. Langs stock is this unused top right corner margin block of 32 of the United States 1861 5¢ orange brown type II Thomas Jefferson stamp. The block is the largest recor 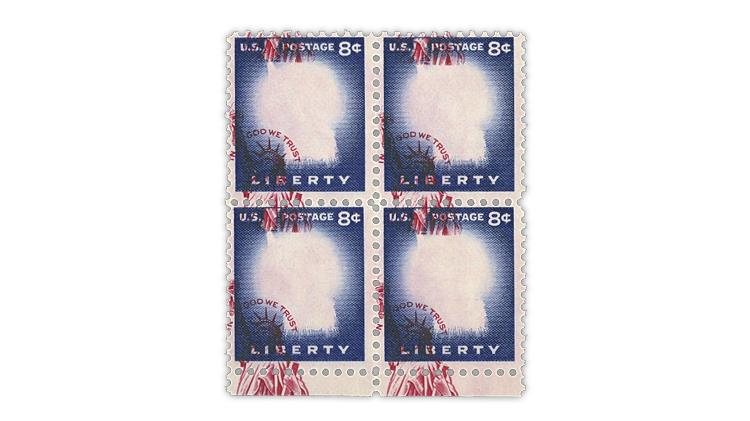 This bottom margin block of four U.S. 1954 8¢ Statue of Liberty stamps with a dramatic downward shift of the carmine Lady Liberty vignette is among the many errors, freaks and oddities up for bids during the Oct. 28-30 Kelleher auction.
Previous
Next

Daniel F. Kelleher Auctions will offer the first part of the diverse and expansive holdings of United States and possessions stamps of the late William S. Langs during a three-day sale to be conducted Oct. 28-30 at the firm’s gallery in Danbury, Conn. Each day’s session of the auction will begin at 10 a.m. Eastern Time.

Langs, who died July 7 at the age of 61, was a well-known dealer in classic U.S. stamps, errors, essays and proofs. Along with his William Langs Stamps online retail store, he was an active dealer on the eBay and HipStamp websites.

“Not since the Weill Brothers Stock, over three decades ago, has there been a holding commissioned to public auction of this value and size,” Kelleher states in the auction catalog. All told, 1,890 lots in a variety of price ranges will be available to tempt bidders.

A selection of postmasters’ provisional stamps opens the first session on Wednesday, Oct. 28. This session also includes definitive (regular-issue) stamps from all the key periods, beginning with the 1847 issue and concluding with the 1890 issue.

Large multiples of 19th-century U.S. stamps are scarce because most were broken up over the years to satisfy collector demand. Those that survive typically attract keen interest when they come up for sale.

One such large multiple in the Kelleher sale of the Langs stock is an unused top right corner margin block of 32 of the 1861 5¢ orange brown type II Thomas Jefferson stamp (Scott 30). The block is the largest recorded multiple of this stamp. Type II varieties of the 1861 5¢ Jefferson are identified by the partially cut away projections at the top and bottom of the design.

In addition the block “is the largest recorded block of any of the 1857-61 5¢ varieties,” according to Kelleher.

Three stamps in the block are never hinged, and the stamp at bottom left has a small thin. Kelleher states that the block has been “partially separated and rejoined at center.”

The block boasts an impressive provenance, having graced the collections of Alfred H. Caspary and Eugene Klein.

The Scott Specialized Catalogue of United States Stamps and Covers values an unused block of four of the 1861 5¢ orange brown type II Jefferson at $7,000. A block of four is the largest multiple of this stamp valued by Scott. Kelleher is offering the block of 32 with an estimate of $30,000 to $40,000.

On Thursday, Oct. 29, the sale resumes with an array of 1893 Columbian stamps and continues with offerings of all major commemorative and definitive issues of the late 19th and early 20th centuries. Stamps from the long-running Washington-Franklin series, including graded examples, are well represented. The day’s session concludes with 175 lots of errors, freaks and oddities.

One of the more eye-catching printing freaks up for bids is a never-hinged bottom margin block of four of the 1954 8¢ Statue of Liberty stamp (Scott 1041) featuring a dramatic downward shift of the carmine Lady Liberty vignette (central design).

The spectacularly misprinted block, which Kelleher describes as “otherwise pristine with wet-printing pinking of paper,” is offered with an estimate of $400 to $600.

Back-of-the-book issues, beginning with the first U.S. airmail issue of 1918, highlight the third day of the sale on Friday, Oct. 30.

A single catalog for the auction is available and can be viewed on the Kelleher website, with online bidding options available.

This article was updated Oct. 14 after a described lot was withdrawn from the sale.