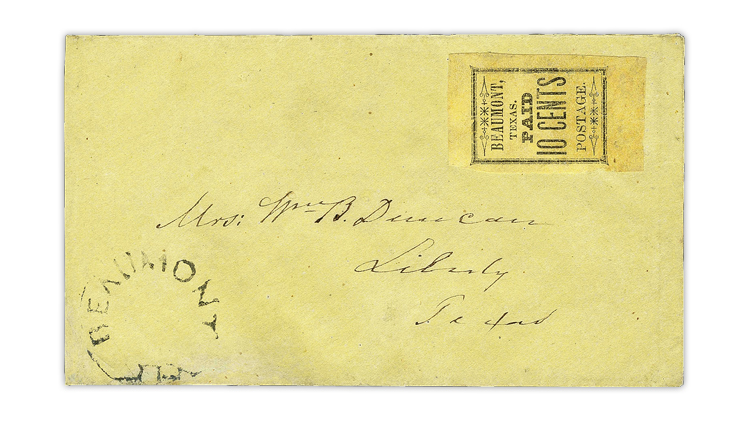 The iconic “Large Beaumont” cover franked with the unique example of the large Beaumont, Texas, 10¢ black on yellow postmaster’s provisional, a key item from the Erivan collection of Confederate States postal history, sold Dec. 10 for an impressive $247,8

When a unique stamp or item of postal history comes up for sale at auction, bidders take notice, and the competition sometimes results in a substantial realization.

Such was the case when the “Large Beaumont” cover crossed the auction block during H.R. Harmer’s Dec. 10, 2019, sale of Confederate States postal history from the famed collection of Erivan Haub.

Spirited bidding began shortly after the cover was offered at an opening price of $25,000. The cover was hammered down for $210,000 to a well-known stamp dealer who was bidding on the floor during the auction. Adding in Harmer’s 18 percent buyer’s premium brought the final realization to $247,800.

The cover’s nickname comes from its franking: the unique example of the large Beaumont, Texas, 10¢ black on yellow postmaster’s provisional (Scott 12X3).

Harmer noted that this cover, which first came to light in 1923, was featured in Life magazine’s 1954 “World’s Rarest Stamps,” and described it as “one of the most outstanding items” in the Erivan collection and one of the “icons of Confederate philately.”

Since its discovery almost a century ago, the Large Beaumont cover has graced numerous important collections, including those of Alfred H. Caspary, Josiah K. Lilly and the Weill brothers.

The 2020 Scott Specialized Catalogue of United States Stamps and Covers values the Large Beaumont cover at $90,000.

According to Harmer, the cover had been off the market for decades following its acquisition by Haub.

The new auction realization provides the Scott catalog editors with an opportunity to adjust the value for Scott 12X3 in Vol. 1A of the 2021 Scott Standard Postage Stamp Catalogue, which will be published in April.