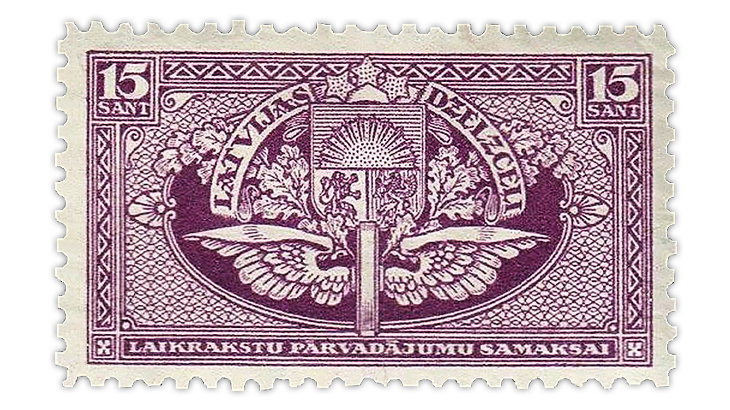 Although they are not listed in the Scott Standard Postage Stamp Catalogue, Latvian railway newspaper stamps are popular with Baltic States collectors.

One of the three Baltic States on the Baltic Sea in northeastern Europe, Latvia borders Estonia, Lithuania, Belarus and Russia.

In the past, Latvia has been ruled by the Prussians, the Polish-Lithuanian Commonwealth, Sweden and Russia. It gained independence in 1918 at the end of World War I, but lost it in 1940 after it was awarded to the Soviet Union in the Nazi-Soviet Pact of 1939. Its independence was restored in 1991 as the Soviet Union collapsed.

Many Latvian immigrants and refugees found a home in the United States during the upheavals of the 20th century, and Latvia’s stamps have a sizeable following among American collectors.

Latvia issued two sets of railroad newspaper stamps during its first period of independence. They were similar in purpose and use to United States newspaper stamps, showing payment for transportation of bundles of newspapers.

The attractive design used for all stamps in both sets features a winged train wheel and the Latvian coat of arms.

The five stamps in the first set issued in 1926 were denominated 10 santimu, 15s, 20s, 50s and 1 lats. The stamps were produced on paper watermarked with wavy lines.

The second set, issued in 1938, was on paper watermarked multiple swastikas and the stamps were denominated 5s, 10s, 15s, 50s and 1 lats.

These railroad newspaper stamps are not listed in the Scott Standard Postage Stamp Catalogue, evidently because it has not been possible to establish whether they paid freight or postage charges. They were listed in the old Minkus New World-Wide Postage Stamp Catalog. At one time they were listed in J. Barefoot’s Baltic States Revenues catalog, but they have been delisted as they are definitely not revenue stamps.

Listed or not, these stamps have always been popular with Baltic States collectors.