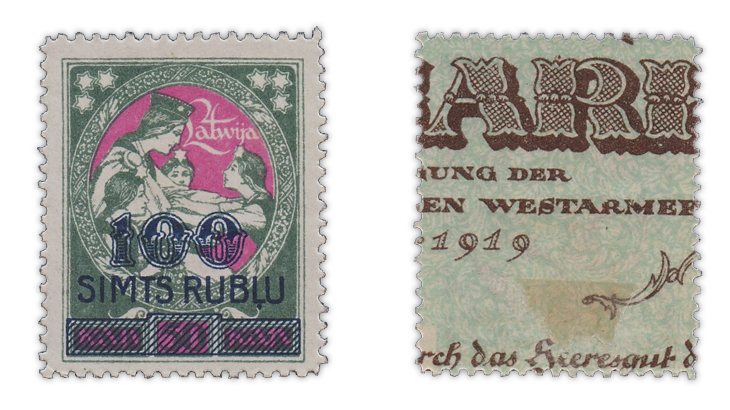 The overprinted and surcharged Latvia Welcoming Home Latgale Province stamps (Scott 95-99) were printed on the backs of unfinished occupation forces banknotes. The 50-kapeika stamp was surcharged to higher denominations in May 1921 because of rampant infl

Occasionally the back of a stamp can be as interesting as the front. The Baltic republic of Latvia gained its independence from Russia at the end of World War I.

In the early days of independence, paper for printing stamps was in short supply, so the resourceful Latvians printed many of the first issues on the backs of German military maps, writing paper with ruled lines, and unfinished banknotes from various occupation forces.

In March 1920, Latvia issued a set of two Latvia Welcoming Home Latgale Province stamps (Scott 68-69). The stamps, denominated 50 kapeikas and 1 rublis, were printed on the backs of unfinished banknotes of the government of the White Army leader, Pavel Bermondt-Avalov, who occupied Latvia for a time during the Russian Civil War, and on the backs of German occupation Ober Ost script.

The stamps commemorated the defeat and expulsion of Bolshevik troops from the province, which was then reunited with the rest of the republic.

By May 1921, rampant inflation made the 50k stamp impractical for use as postage. Remaining stocks of the stamp were overprinted and surcharged to new values in the denominations of 10r, 20r, 30r, 50r and 100r (Scott 95-99).

Excellent forgeries of the overprint were produced on genuine stamps for the two highest face-value stamps. For a detailed description of the forged overprints, see John Barefoot’s Forgery & Reprint Guide Part 9: Latvia 1, pp.13-14.