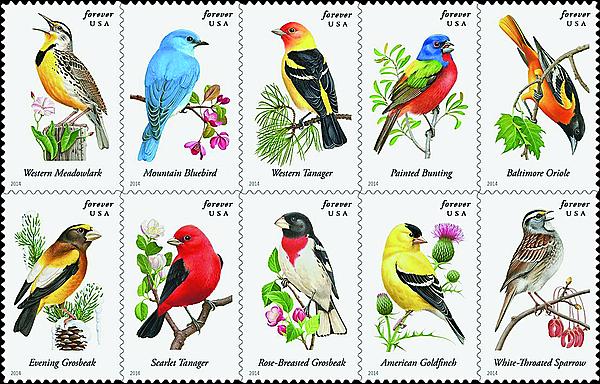 The U.S. nondenominated (49¢) Charlton Heston forever stamp in the Legends of Hollywood series. 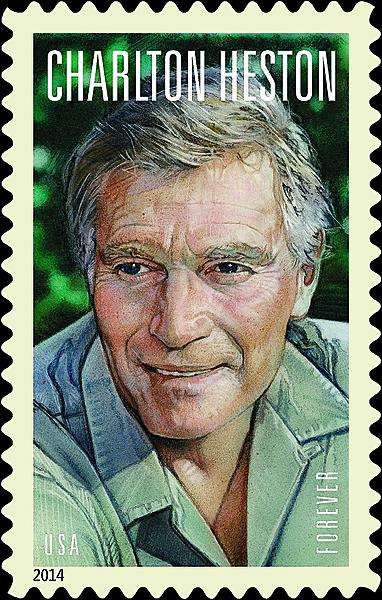 These 10 United States nondenominated (49¢) Songbirds commemorative forever stamps will be issued in April in Corpus Christi, Texas. The self-adhesive stamps will be sold in double-sided panes of 20, according to information from the Postal Service.

The Legends of Hollywood series will continue in 2014 after a two-year hiatus, and 10 colorful songbirds will fly onto new forever stamps.

Both of these United States stamp issues are slated to appear in post offices in April.

The design for the United States nondenominated (49¢) Charlton Heston stamp was revealed Jan. 30.

The single stamp shows a vertical portrait of the film star based on a photograph taken by his wife, Lydia Clarke Heston. The stamp portrays the actor in a gray shirt against a green and black background. The stamp frame is cream.

The stamp portrait was created by prominent commercial artist Drew Struzan, who has illustrated movie posters and book covers as well as several previous stamps for the U.S. Postal Service.

The stamp pane selvage image, described but not shown to journalists, depicts the chariot-racing scene from the movie Ben-Hur.

Heston won the Academy Award for best actor in the title role of the 1959 historical drama.

With regard to the expected April issue date for the Charlton Heston stamp, USPS spokesman Mark Saunders told Linn’s, “I don’t have anything that I can release on that yet.”

The issuing location has been listed in the USPS Postal Bulletin as Hollywood, Calif.

The designs of the nondenominated (49¢) Songbirds stamps were revealed Jan. 24.

A U.S. Postal Service publicity image of all 10 designs is shown nearby.

Each stamp features an illustration by Robert Giusti of a songbird with its name below. Giusti also created illustrations for several previous U.S. stamps, including the 86¢ Tufted Puffins stamp issued Jan. 23, 2013 (Scott 4737).

The set will be issued in Corpus Christi, Texas.

The American Birding Association will hold its annual convention in Corpus Christi April 22-26, but the Postal Service did not disclose if the ceremony would take place at the convention.

The Songbirds stamps will be sold in double-sided panes of 20.