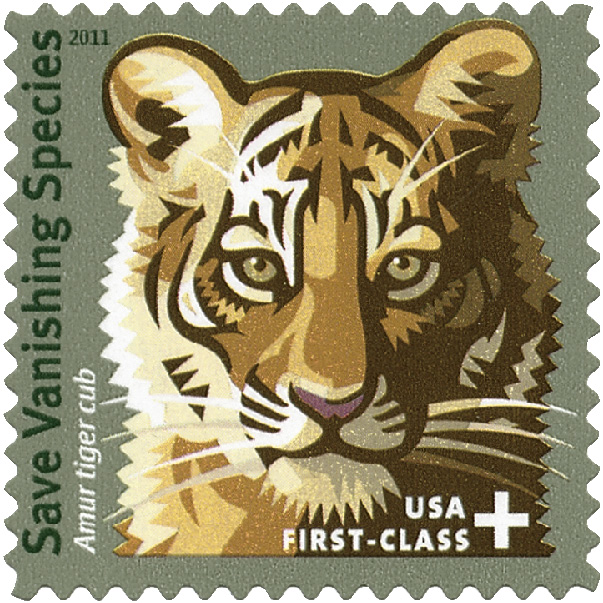 The Save Vanishing Species semipostal stamp that was removed from sale Dec. 31, 2013. New legislation is in the works to allow the stamp to be sold for four more years.

Six months after it went off sale, the Save Vanishing Species semipostal stamp might be headed back to United States post offices. Legislation that would allow the stamp to be sold for four more years won unanimous approval from the Senate Homeland Security Committee June 25.

The U.S. Postal Service did not oppose the measure, which now goes to the Senate.

Sales of the nondenominated semipostal, featuring the image of an Amur tiger cub (Scott B4), ended Dec. 31 with 25.5 million of the stamps sold, according to the U.S. Fish and Wildlife Service, which administered the surtax collected from sales of the stamp.

A total of 100 million stamps were produced.

“I’m pleased this important legislation passed out of committee today,” said Sen. Rob Portman, R-Ohio, who led the effort to reinstate sales of the stamp.

“At no cost to taxpayers, the reauthorization of the Multinational Species Conservation Funds Semipostal Stamp Act will benefit conservation programs and endangered species for years to come,” he said in a news release.

“I’ll continue to work with my colleagues to move this bill forward,” Portman added.

Udall was quoted in a news release then as saying the “almost $2 million” it had raised at the time showed “that it’s an effective effort that should be extended.”

The initial bill for the nation’s fourth semipostal was introduced in 2009 by Rep. Henry Brown, R-S.C.

Brown cited the Postal Service’s first and most successful semipostal, the Breast Cancer Research semipostal, as providing a model for his proposal.

Under strong pressure from the stamp’s supporters, that first semipostal has remained on sale since 1998 and has raised the most funds of any of the U.S. semipostal stamps.

A source close to Portman said Postmaster General Patrick Donahoe had assured the Ohio lawmaker that the USPS still had 74 million of the Endangered Species stamps, and that these would be placed on sale as soon as legislation was enacted.

The Senate legislation does not address what the price of the Save Vanishing Species semipostal should be if sales resume.

It last sold for 55¢, which included a 9¢ surtax in addition to the 46¢ price then charged for first-class letters.

The Breast Cancer Research semipostal is now selling for 60¢ (49¢ postage plus an 11¢ surtax).

A Postal Service source told Linn’s that the USPS would follow whatever direction Congress provides on the future of the stamp.

There is no House measure for extending the stamp’s sales, so the success of the new sales effort will depend on passage of the Senate bill.