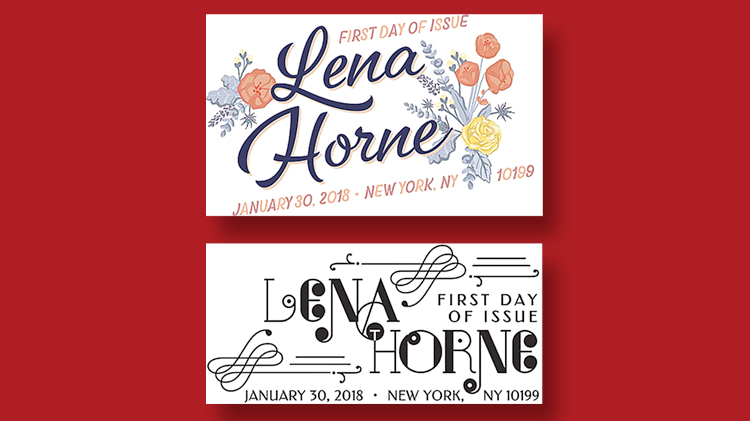 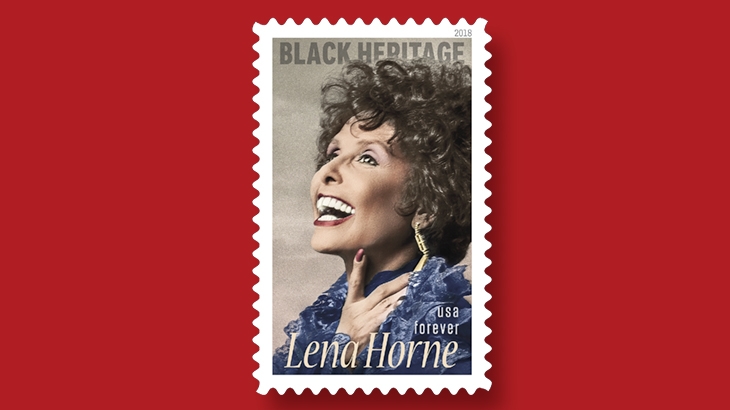 Entertainer Lena Horne is being honored on a new forever stamp in the Black Heritage series that will be issued Jan. 30 in New York City. 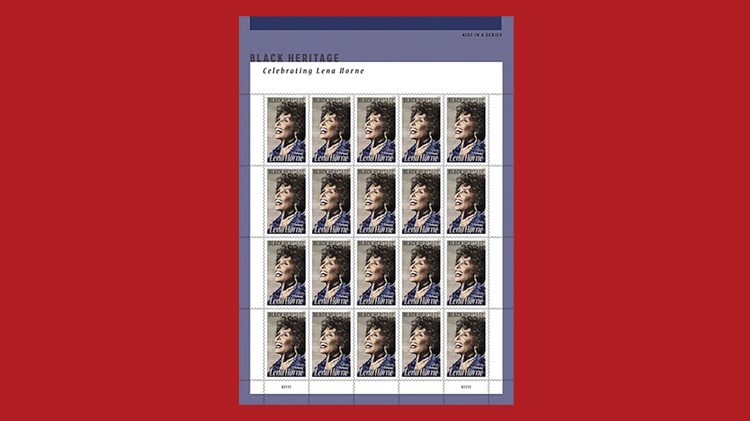 The pane of 20 Lena Horne stamps identifies the issue as the 41st in the Black Heritage series. Because of the Jan. 21 rate change, the individual stamps sell for 50¢ and the cost of the pane is $10.
Previous
Next

The new vertical commemorative is the 41st stamp in the U.S. Postal Service’s long-running Black Heritage stamp series, which began in 1978 with a 13¢ stamp honoring abolitionist Harriet Tubman.

As a result of the 1¢ postage rate increase, the nondenominated Lena Horne forever stamp will sell for 50¢ when it is issued Jan. 30. The stamp is being issued in a pane of 20.

The stamp pane includes a purple frame with the inscription “41st in a series” at upper right.

The series title, “Black Heritage” is printed in uppercase letters at upper left, with “Celebrating Lena Horne” offset slightly below it.

A press sheet consisting of six unsevered panes (120 stamps) is available to collectors for the face value of $60.

Printing and other technical details were not released by the Postal Service in time to be included here. They will be published in an upcoming Linn’s Stamp News when they are made available.

A first-day ceremony for the Lena Horne stamp will take place Jan. 30 at 10:30 a.m. at the Peter Norton Symphony Space, Peter Jay Sharp Theater, 2537 Broadway at 95th Street in New York City. The Postal Service has advised that anyone who would like to attend the ceremony will need to secure an online reservation on the USPS site.

“Lena Horne was a trailblazer in Hollywood for women of color and used her fame as an entertainer to become an important civil rights spokesperson,” the U.S. Postal Service said in a press release issued Dec. 28.

Born Lena Mary Calhoun Horne on June 30, 1917, she performed as a chorus line dancer in Harlem’s famed Cotton Club while in her teens, and in 1934 debuted on Broadway in Dance With Your Gods.

Singing in nightclubs and touring with orchestras led by Noble Sissle and Charlie Barnet, her expressive jazz vocals caught the attention of record companies, and she was signed to appear in film musicals throughout the 1940s.

In 1943 she filmed Stormy Weather with Bill Robinson and Cab Calloway for 20th Century Fox. The title song by Harold Arlen and Ted Koehler would quickly become Horne’s signature tune.

While continuing her recording career, Horne made her mark as a nightclub singer and popular television entertainer with an ever-expanding fan base.

During her career, she won three Grammy awards, and in 1981 she received a special Tony award for her successful one-woman Broadway musical revue, Lena Horne: The Lady and Her Music. That same year, she also won the Drama Desk Award for outstanding actress in a musical.

During World War II, she entertained American troops but refused to perform for segregated audiences.

The Postal Service adds that after the war she worked on behalf of Japanese-Americans facing discriminatory housing policies.

“She worked with Eleanor Roosevelt in pressing for anti-lynching legislation,” the Postal Service said. “In the 1960s, Horne continued her high-profile work for civil rights, performing at rallies in the South, supporting the work of the National Council for Negro Women, and participating in the 1963 March on Washington.”

She was awarded the NAACP Spingarn Medal in 1983, cited as an “Artist humanitarian and living symbol of excellence.” The following year she was a Kennedy Center Honors recipient.

President Barack Obama paid tribute to Horne following her death at age 92, saying “she worked tirelessly to further the cause of justice and equality.”

The design of the Lena Horne stamp features a detail of a photograph taken by Christian Steiner in the 1980s. The original black-and-white photo was colorized by Kristen Monthei, with a background added “reminiscent of Horne’s Stormy Weather album, with a few clouds to add texture and subtly make the album reference,” according to the Postal Service.

In an earlier Postal Service project, Monthei had colorized the photograph of Ingrid Bergman on the 2015 forever stamp honoring the actress in the Legends of Hollywood commemorative series (Scott 5012).

Two pictorial first-day cancels (one in black and another in color) show the name “Lena Horne” composed with decorative elements, including flowers on the color postmark.

Both will be offered on first-day covers created without cachets by the Postal Service. Requests for a single first-day cancel on a collector-prepared cover will receive the black cancel at no charge. Requests must be submitted before March 30.