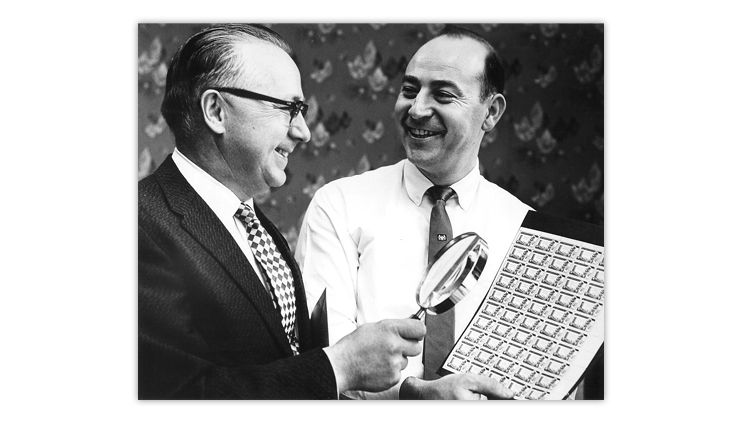 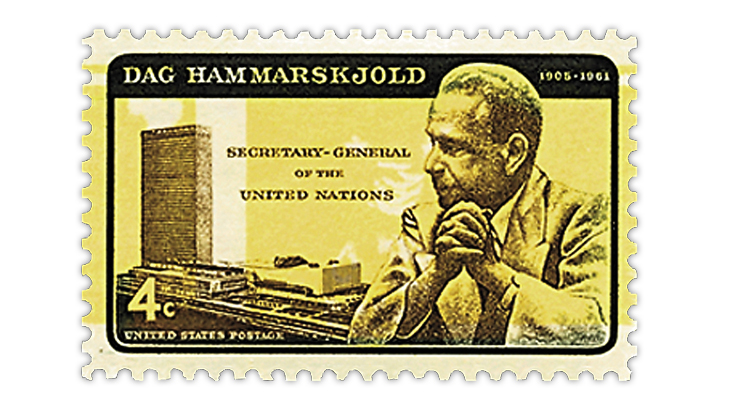 More than 60 million 4¢ Dag Hammarskjold inverts were intentionally reprinted by the U.S. Post Office Department after Leonard Sherman reported his find.
Previous
Next

A jeweler by trade, Mr. Sherman became a figure of philatelic history in 1962 when he revealed he had purchased a pane of the 4¢ Hammarskjold issue with the yellow background inverted (Scott 1203a).

Mr. Sherman’s disclosure nearly three weeks after the stamp was issued Oct. 23, 1962, quickly caught the attention of the news media. Unfortunately for him, it also caught the attention of United States Postmaster General J. Edward Day, who immediately set into motion a plan to nullify the potential value of the blockbuster error.

After notifying post offices on Nov. 13 to halt all sales of the 4¢ Hammarskjold stamp, Day ordered an intentional reprinting of the error to be distributed nationwide.

“Leonard Sherman, who planned to send his five sons to college by selling his portion of a misprinted stamp issue, saw his hopes dissolve today when the government said it would flood the market with the misprints to curtail their value.”

Mr. Sherman put forth a valiant legal effort to stop the reprinting, but Day’s order was acted upon so quickly that the reprinted inverts were being sold in post offices well before Mr. Sherman’s injunction request would be acted upon.

His vision of sudden wealth having vaporized, Mr. Sherman graciously donated the historic pane to the American Philatelic Society in the fall of 1986.

Mr. Sherman is survived by his wife Roslyn, four of their sons, and many grandchildren and great-grandchildren.