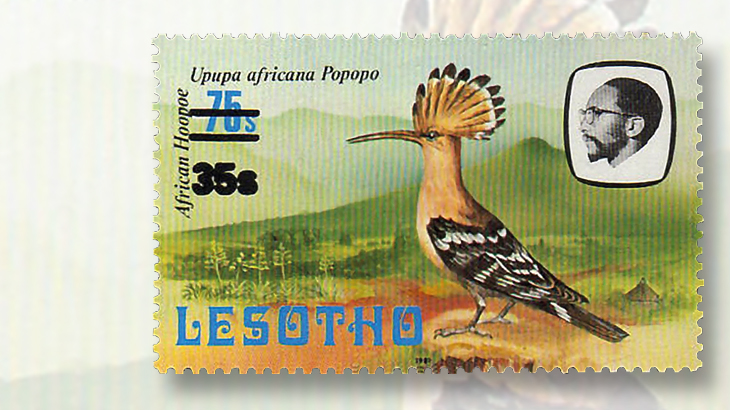 Be on the lookout for overprinted and surcharged Lesotho Bird stamps of the 1980s.

Tip of the Week - By Henry Gitner and Rick Miller

Lesotho is a tiny African kingdom that exists as an enclave surrounded entirely by the Republic of South Africa. Before independence in 1966, it was the British Crown Colony of Basutoland. A constitutional monarchy, its current ruler is King Letsie III.

Lesotho has had a vigorous stamp-issuing policy, producing numerous large, colorful topical stamps primarily for sale to collectors. In the 1980s, it issued several series of Bird stamps with great appeal to topical collectors.

While the basic series were marketed to dealers and collectors, stamps from several of them were overprinted and surcharged, evidently primarily for postal use. Many of them are so scarce that the Scott catalog editors have not been able to establish values for them.

We recommend that you generally keep an eye out for Lesotho surcharged Bird stamps of the 1980s. Some valued by the Scott editors are fairly expensive for modern stamp issues. A good example is the 35-lisente-on-75s African Hoopoe stamp, small “s” variety (Scott 566a).

The 2017 Scott Standard Postage Stamp Catalogue values the stamp at $40 in mint never-hinged condition. An example recently sold in an online auction for the equivalent of $56. — H.G & R.M.