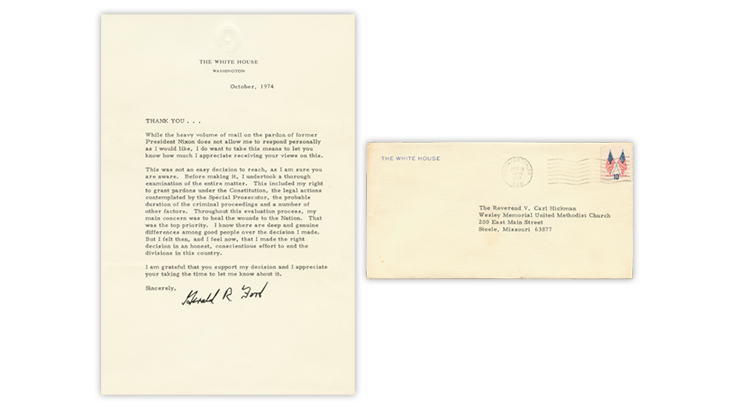 Correspondence from the White House is always collectible whether for the envelope or its contents. In this October 1974 letter, President Gerald Ford explains his rationale for pardoning former President Richard Nixon.

History lurks inside many envelopes that have been saved by stamp and cover collectors. Over many years of looking, I’ve found that covers with “The White House” in the upper left corner and a Washington, D.C., cancellation tend to be retained by the addressees, and they sometimes find their way to collectors — with or without the original contents.

Shown here is a nice example with the letter enclosed that was recently found in a dealer’s stock; it was priced at $10.

On Sept. 8, 1974, when President Gerald Ford pardoned Richard Nixon, it was as if someone had swatted a bees’ nest. Ford received all sorts of criticism for his action, which he believed was the proper course to prevent further division in the country after the impeachment and forced resignation of Nixon. It may even have cost him the chance to be elected to the White House in 1976. From today’s perspective, most historians believe Ford did the right thing.

As reaction raged in the media, some citizens wrote to Ford expressing support, and the letter enclosed in the cover is a printed thank-you note. Here is what it said:

“While the heavy volume of mail on the pardon of former President Nixon does not allow me to respond personally as I would like, I do want to take this means to let you know how much I appreciate receiving your views on this.

“This was not an easy decision to reach, as I am sure you are aware. Before making it, I undertook a thorough examination of the entire matter. This included my right to grant pardons under the Constitution, the legal actions contemplated by the Special Prosecutor, the probable duration of the criminal proceedings and a number of other factors. Throughout this evaluation process, my main concern was to heal the wounds of the Nation. That was my top priority. I know there are deep and genuine differences among good people over the decision I made. But I felt then, and I feel now, that I made the right decision in an honest, conscientious effort to end the divisions in this country.

“I am grateful that you support my decision and I appreciate your taking the time to let me know about it.”

I think it is likely that the same letter with a different ending paragraph would have been sent to those who wrote criticizing the decision. I wonder if a Linn’s reader might have such a letter?