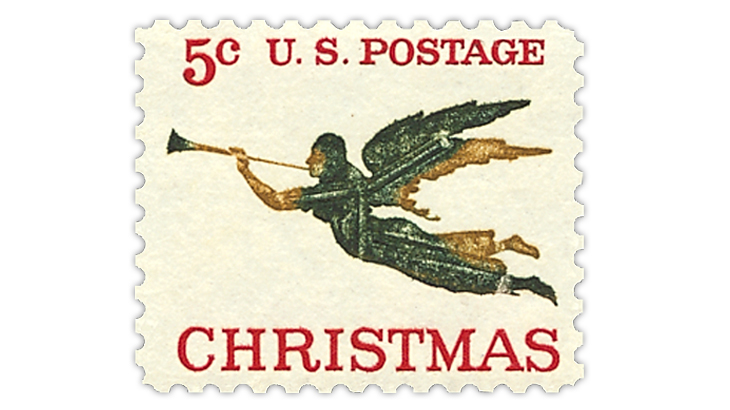 Figure 1. The design of the 1965 5¢ Christmas stamp is based on a watercolor painting of an 1840 weather vane on a church in Newburyport, Mass. 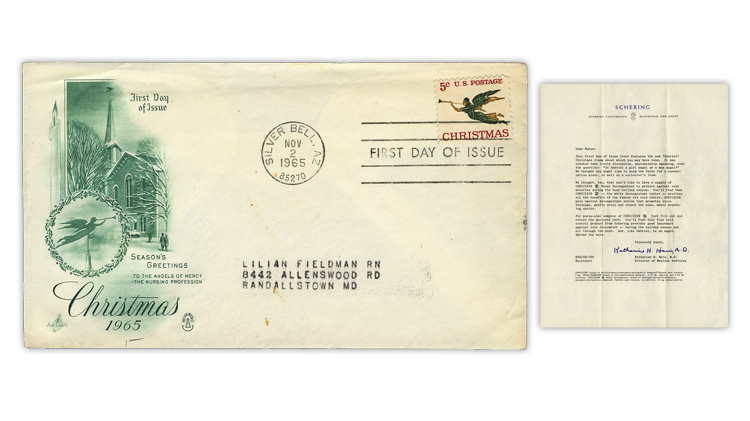 Figure 2. A pharmaceutical company used a first-day cover of the 1965 5¢ Christmas stamp to promote one of its products. The enclosed letter mentions a lively discussion about the stamp’s design. 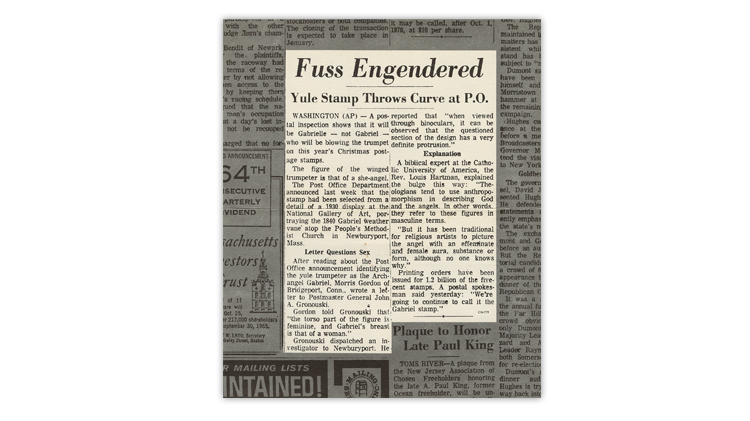 Figure 3. A reprint of an undated article from an unnamed newspaper was enclosed in the FDC shown in Figure 2. The article provides more information about the debate regarding the stamp’s design. 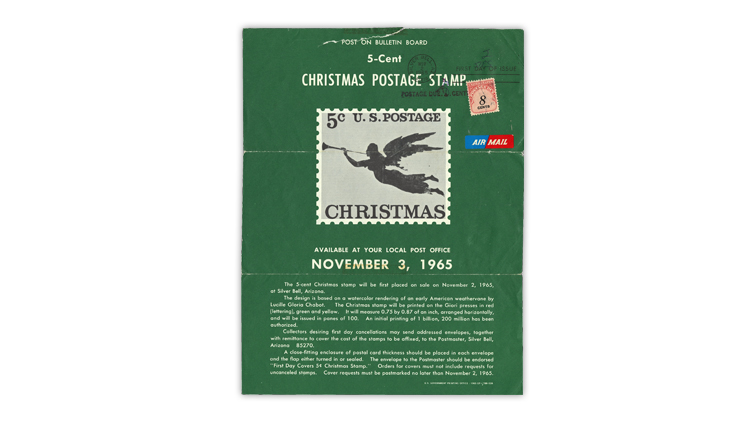 Figure 4. Intended for display on post-office bulletin boards, these new-issue announcement bulletins were also available to subscribers. This one for the 1965 5¢ Christmas stamp was sent in for first-day servicing. The request asked for two of the 5¢ sta 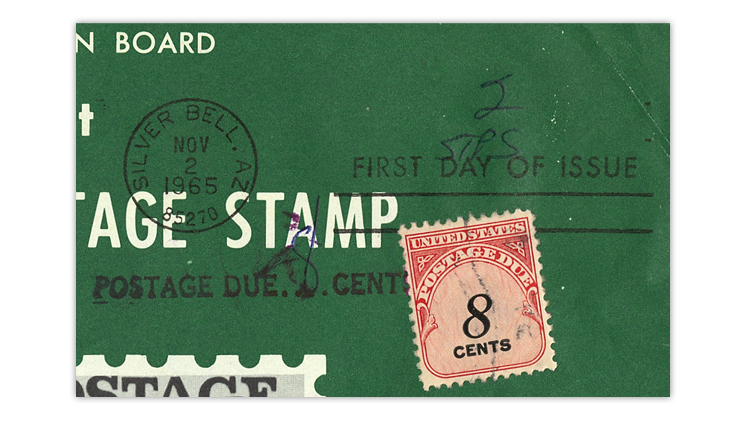 Figure 5. The two 1965 5¢ Christmas stamps that were applied to the new-issue announcement bulletin shown in Figure 4 fell off somewhere in transit, taking part of the first-day cancel with them, as shown in this close-up. The bulletin was assessed 8¢ pos
Previous
Next

One of the fun byways of first-day cover collecting is finding FDCs sent by companies to their customers.

Often at Christmastime, the letters enclosed in such covers were used to convey wishes of the season and, of course, mention the company’s products. Sometimes the letter also commented on the newly issued stamp.

In 1965, the United States Post Office Department issued 1.2 billion examples of what was becoming standard postal fare: a Christmas-themed stamp (the fourth in the series) for use on greeting cards. Figure 1 shows this 5¢ stamp issued Nov. 2, 1965, in Silver Bell, Ariz.

The Schering Corp. of Bloomfield, N.J., sent a letter promoting its nasal decongestant Coricidin inside FDCs of this Christmas stamp. The cover and letter are shown in Figure 2. The salutation on the letter is “Dear Nurse.” It is signed by Katharine H. Hain, M.D., director of medical services.

The letter begins with a surprising point regarding the stamp: “This First Day of Issue Cover features the new ‘Gabriel’ Christmas stamp about which you may have read. It has created some lively discussion, anatomically speaking, over the question: ‘Is Gabriel a girl angel or a man angel?’ We thought you might like to keep the cover for a conversation piece, as well as a collector’s item.”

Enclosed with the letter was a reprint of an undated article from an unnamed newspaper, but sourced to the Associated Press. As shown in Figure 3, its headline and subhead read “Fuss Engendered” and “Yule Stamp Throws Curve at P.O.”

The first paragraph reads, “A postal inspection shows that it will be Gabrielle — not Gabriel — who will be blowing the trumpet on this year’s Christmas postage stamps.”

The article notes that the Post Office Department reported that the stamp’s design was “selected from a detail of a 1930 display at the National Gallery of Art, portraying the 1840 Gabriel weather vane atop the People’s Methodist Church in Newburyport, Mass.”

The article also reports that a letter about the angel pictured on the stamp was written to Postmaster General John A. Gronouski. The letter said that “the torso part of the figure is feminine, and Gabriel’s breast is that of a woman.”

According to this anonymous newspaper report, after Gronouski received the letter he sent an investigator to Newburyport. The investigator reported, thus: “When viewed through binoculars, it can be observed that the questioned section of the design has a very definite protrusion.”

The article concludes with this explanation: “A biblical expert at the Catholic University of America, the Rev. Louis Hartman, explained the bulge this way: ‘Theologians tend to use anthropomorphism in describing God and the angels. In other words they refer to these figures in masculine terms.

“But it has been traditional for religious artists to picture the angel with an effeminate and female aura, substance or form, although no one knows why.”

The article ends with a quote from a postal spokesman: “We’re going to continue to call it the Gabriel stamp.”

More than 50 years after the issuance of this 5¢ Christmas stamp, most collectors are not aware that Gabriel’s gender was a matter of discussion. We can thank the Schering Co. for preserving evidence of the question.

If you decide to visit the church to see this weather vane for yourself, you will be disappointed. A new weather vane stands in its place, installed in 2017 but dedicated in 2018.

In an April 16, 2018, Newburyport News article about the dedication, Jack Shea wrote: “The original weather vane was cut from sheet iron in Charlestown in 1840 and placed on the steeple in 1898. Since then, it has gained national fame, inspiring a watercolor painting by Lucille Chabot in 1937, which landed on a Christmas stamp issued by the U.S. Postal Service in 1965.

“But after a series of weather vane thefts by thieves in helicopters in the late 1980s, the People’s [Methodist Church]weather vane was taken down for safekeeping. In 2001, it was sold to a private collector. It is now in the Smithsonian Institution in Washington, D.C.”

A weather vane installed in 1988 became worn by weather and vibration and was replaced by the 2017 weather vane, which is handcrafted from copper and covered with gold leaf and described as “an exact replica of the original.”

Stamps lost in the mail

Figure 4 shows a post office new-issue announcement bulletin for the 1965 Christmas stamp that Charles Vukotich Jr. sent to me to share with Linn’s readers.

Such announcements were intended for posting on bulletin boards at post offices to encourage over-the-counter sales of the stamp being announced. The inscription at the top of this example reads “Post On Bulletin Board.”

The POD also allowed collectors to subscribe to these new-issue announcement bulletins. Vukotich would send his in to receive first-day cancellations.

For this 1965 bulletin, he added an airmail sticker and asked for two of the new 5¢ Christmas stamps to be applied to pay the 8¢ airmail rate. He also applied a peelable address label, which he would later remove.

The two 5¢ Christmas stamps were applied to the bulletin, but apparently not very carefully. Somehow they came off in the mail.

In the close-up of the upper right part of the bulletin shown in Figure 5, you can see where the stamps had been placed, because when they fell off, they took the top two killer bars of the Silver Bell, Ariz., first-day cancel with them.

The result was that the bulletin was handled for delivery as 8¢ postage due, with one of the then-current 8¢ postage due stamps (Scott J96) added.

The bulletin also provided some information about the stamp: “The design is based on a watercolor rendering of an early American weather vane by Lucille Gloria Chabot. The Christmas stamp will be printed on the Giori presses in red (lettering), green and yellow. It will measure 0.75 inches by 0.87 of an inch, arranged horizontally, and will be issued in panes of 100. An initial printing of 1 billion, 200 million has been authorized.”