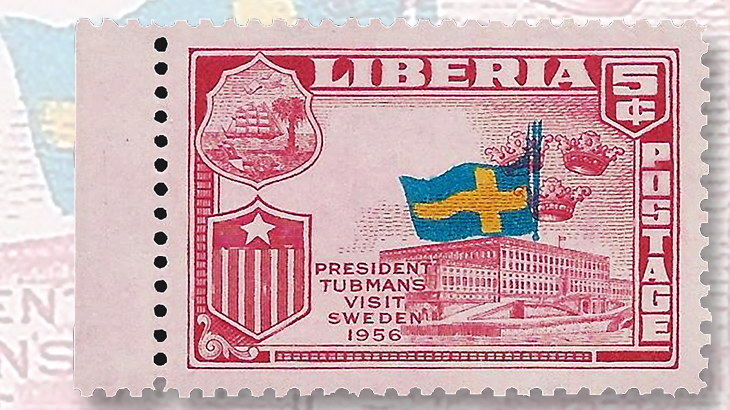 The Swedish part of Tubman’s European tour is marked by a 5¢ stamp picturing the royal palace in Stockholm and, on this example, the nation’s flag upside down. 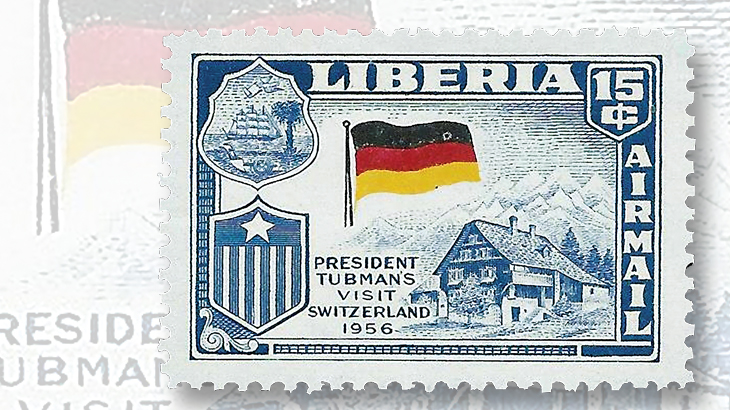 Some errors in Liberia’s 1958 stamp set depict the wrong flags for various countries, such as this German flag on a stamp marking the Swiss visit. 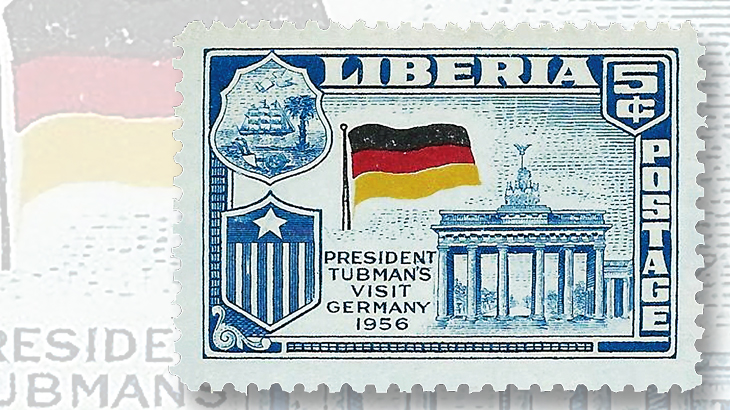 The 1958 stamp marking Liberian President Tubman’s 1956 visit to Germany depicts the national flag and the Brandenburg Gate in Berlin.
Previous
Next

The West African nation of Liberia was founded way back in the 1820s by freed slaves from the United States.

Despite the fact that the Americo-Liberian part of the population never amounted to more than 3 percent to 5 percent of the whole, it was this tiny elite that ruled the country for a great many years. Ironically, the slave trade continued long after the foundation of Liberia.

In 1944, William Tubman, who had been born in Liberia in 1895, became the 19th president of the country. He worked hard to unite the Americo-Liberian minority with the tribal majority. Tubman remained Liberia’s president until his death in 1971.

Liberia’s modern, post-Tubman history has been marked by dictatorships, a long civil war in the 1990s, political unrest, and, most recently, the Ebola virus disease epidemic that has claimed thousands of lives.

Toward the end of the 1950s, Liberia featured prominently in the Swedish mass media. A consortium of mining companies had been established in 1957 to exploit Liberia’s rich iron ore deposits.

Perhaps the plans to start the mining of iron ore prompted President Tubman to add Sweden to his 1956 seven-nation European tour, which also included visits to France, Germany, Italy, the Netherlands, Switzerland, and the Vatican City State.

The Liberian Post Office issued a set of seven stamps in 1958 marking the president’s European tour.

Why the stamps were issued two years after the trip is a mystery.

The set of stamps consists of three regular stamps (Scott 368-370) and four airmail stamps (C114-C117). It is a handsome set, depicting typical scenery from the countries Tubman visited as well as their national flags in the actual colors.

According to the Scott Standard Postage Stamp Catalogue, the set went on sale on Jan. 10, 1958 (some sources say Jan. 15). It had been engraved (the frames) and lithographed (the vignettes) by H.L. Peckmore & Son of Elizabeth, N.J.

Harry L. Peckmore had produced earlier stamps for Liberia, and might be known to United States collectors as the engraver of the 1934 National Parks issue.

When Henry H. Rogers described the European tour set in his book, A Century of Liberian Philately (Winnipeg, Canada; undated but possibly 1960), he stated that no errors or varieties were known. Now we know that this statement was far from correct.

Manfred Beier, on his Philately of Liberia website, calls the set “notorious” for its problems, and states that they were “deliberately produced with the philatelic market in mind.”

Perhaps the most spectacular errors are the flags printed upside down. The second illustration here shows the stamp with Sweden as its subject.

The regular stamp, Scott 370, portrays the royal palace in Stockholm and above it the three crowns that are a national symbol (and the name of the Swedish national ice hockey team).

The stamp in this illustration, however, has the Swedish flag inverted. All the stamp designs in the set exist with this interesting inverted-flag variety.

Either intentionally or because the printer didn’t know very much about European national flags, several designs exist with the wrong flag.

I have examples with the German flag printed on the stamps marking the president’s visits to Italy and the Netherlands, and the third illustration shows the German flag on the Swiss-visit stamp.

When Rogers published his book, he was a leading authority on Liberian philately, but he obviously had no knowledge of all these rather spectacular errors. Thus, we must assume that the error stamps had not yet reached the philatelic marketplace at that point in time (the early 1960s).

In a price list dated Nov. 23, 1991, issued by Liberian specialist dealer Henry Chlanda, the entire set with inverted flags and imperforate was offered for $180.

An imperforate set with no flags at all was for sale at only $20. Obviously, by then examples of the all the errors were available to the trade.

Could these have been genuine printing errors or had they been produced on purpose? The Scott Standard catalog dos not list any of the errors, stating only that Scott 368-370, issued as perforated gauge 10½, do “exist imperf.”

Even if these stamps do have a dubious pedigree, they still add a lot of pizzazz to a collection of Liberia.