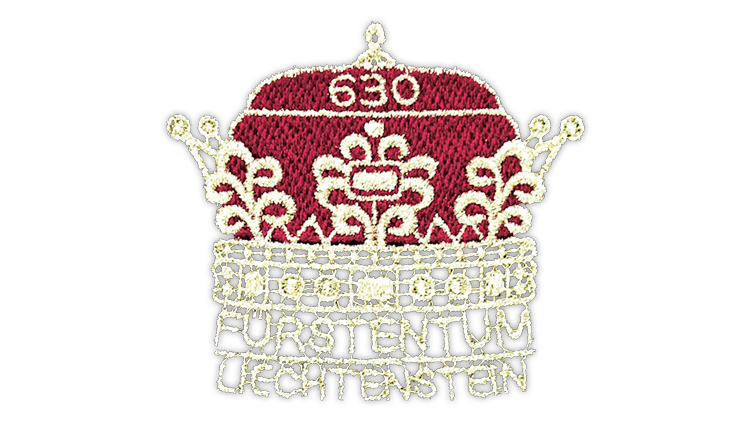 To celebrate its 300th anniversary on Jan. 23, the Principality of Liechtenstein will issue its first embroidered souvenir sheet.

The 6.30-franc self-adhesive souvenir sheet is shaped like a crown, known as a princely hat. Peter Vogel designed the sheet, which measures 56 millimeters by 51 mm. The printing quantity was 70,000.

Hammerle & Vogel produced the sheet by embroidery in red and gold. This embroidery manufacturer based in Lustenau, Austria, also has produced embroidered stamps for Austria, starting with the Edelweiss stamp issued July 19, 2005 (Scott 2019). More recently, it created the Styrian Hat stamp issued Sept. 22, 2018.

Located between Germany, Austria and Switzerland, Liechtenstein is the sixth smallest country in the world. The landlocked principality occupies an area of a little less than 62 square miles.

Although the region has been inhabited for approximately 7,000 years, it wasn’t known as Liechtenstein until the 18th century.

Liechtenstein’s official tourism website, https://tourismus.li/en, said: “The name ‘Liechtenstein’ was given to the region by the Princes of Liechtenstein, who purchased the County of Vaduz (1712) and the lands of Schellenberg (1699) and united them to form the Principality of Liechtenstein in 1719.

“The name of the eponymous princely house can be traced back to a castle in the town of Maria Enzensdorf in Upper Austria. Built by Hugo von Petronell-Liechtenstein around 1130, this castle is said to stand on a rock known as the light (‘Licht’) stone (‘Stein’).”

The principality’s official 300th anniversary celebration is on Jan. 23, the day the embroidered souvenir sheet is being issued, although events will be held throughout the year.

For information about the souvenir sheet and other products for the 300th anniversary, visit the website. The mailing address is Philatelie Liechtenstein, Alte Zollstrasse 11, Principality of Liechtenstein.