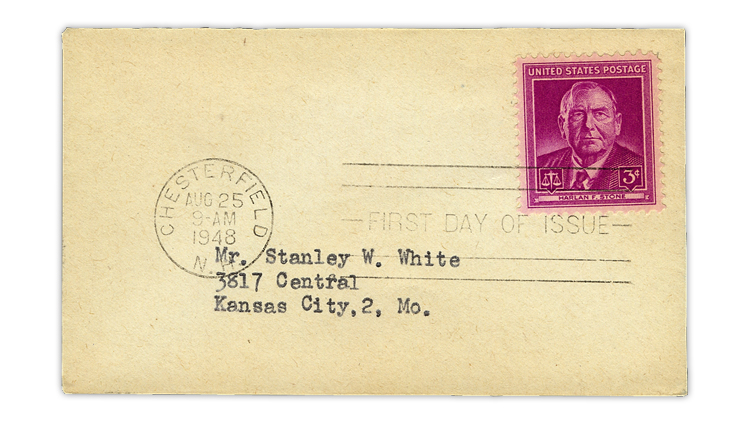 The author’s miniature first-day cover for the 1948 3¢ Harlan F. Stone commemorative has a light imprint of the first-day cancel.

First-day cover collectors have probably noticed that it is hard to find a 1948 3¢ Harlan Fisk Stone (Scott 965) FDC with a dark cancellation.

I collect miniature FDCs, and my Stone example is shown here. I bought it hoping to replace it one day with a more presentable cancel.

The story of the Harlan F. Stone FDCs is a tale of problems, starting with the selection of Stone’s birthplace, Chesterfield, N.H., as the location for the first-day ceremony.

The next candidate was Keene, N.H., 12 miles east of Chesterfield. But after it was pointed out that most Chesterfield mail went through Brattleboro, Vt., 9 miles west, that post office was chosen to handle the requests.

The Brattleboro postmaster was authorized to hire 66 temporary workers for two weeks to handle the rush.

Four men operated two machines in shifts throughout the first day. As Stone described it in his article, “They failed to monitor the quality of the ‘First Day of Issue’ imprints, turning out mostly faint impressions, many of them virtually unreadable.”

An official total of 362,170 Harlan F. Stone FDCs were serviced by the four men and three others using hand cancellers.

I will keep looking, though, hoping to find a better imprint than the one I have.