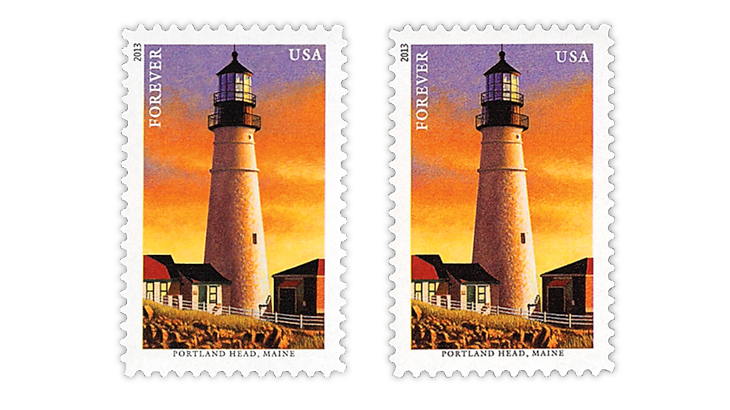 Two United States Portland Head Lighthouse forever stamps from a New England Coastal Lighthouses pane of 20 issued July 13, 2013. Note the position of the “Forever” and the “USA” on both. The example at left has the text placed higher than the others on t

Varieties on modern United States stamps continue to turn up, but sometimes word of their discovery is hidden in plain sight.

While proofreading the pages of the 2020 edition of the Scott Specialized Catalogue of U.S. Stamps and Covers, I noticed a listing for a minor variety of one of the New England Coastal Lighthouses forever stamps issued in 2013 in panes of 20 with the five designs se-tenant (Scott 4791-4795).

I examined a pane, and sure enough those words were slightly higher on the first stamp than on the other three examples of the Portland Head Lighthouse stamp in the pane. The catalog values for this variety are approximately double those for a normal example.

This minor variety listing is not new; it first appeared in the 2015 edition of the Scott U.S. Specialized catalog.

Also, this is not the first time typography was placed differently on a pane of lighthouse stamps. The other example occurred in the 2003 Southeastern Lighthouses issue (Scott 3787-3791). On the stamp in position 2 of the pane of 20, the text “37 USA” is placed lower than on the other Cape Lookout Lighthouse stamps in the pane. The variety is Scott 3788a.

A strange coincidence, but these subtle varieties are fun to watch for while sorting through mixtures of used stamps or examining your collection.