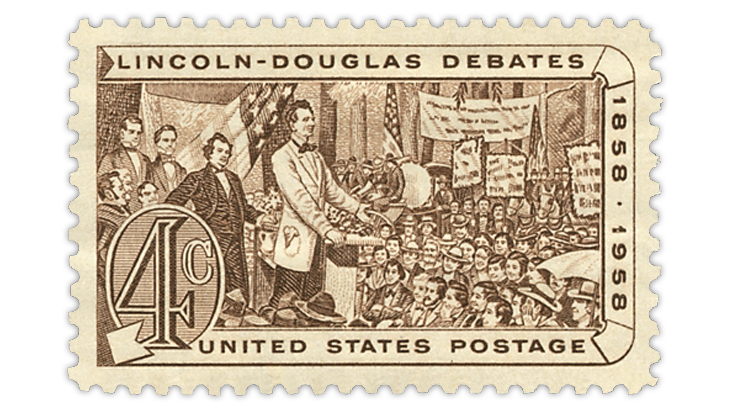 The cartoon caption contest image for April is the 1958 4¢ commemorative stamp featuring the Lincoln-Douglas debates of 1858. Entries must be received by April 24 for a chance to win a prize. The rules are in the accompanying article.

Politics is endlessly fascinating for some and endlessly annoying for others. We’ve come a long way from the 1860s when “Honest Abe” Lincoln was president, but some things never change.

First, what’s different? Well, the citizens of Lincoln’s day did not have to suffer robocalls, and sophisticated polling to determine how the election might go was still many years in the future.

As for what remains the same, a series of debates between the candidates is just one example. In that vein, let’s use the 1958 4¢ commemorative from the Lincoln Sesquicentennial issue (Scott 1115). It portrays a scene from the Lincoln-Douglas debates.

The design is based on a painting by Joseph Boggs Beale. Lincoln is featured, but Stephen Douglas can be seen standing behind him, waiting for his turn to speak.

Lincoln and Douglas were candidates for the U.S. Senate in 1858. Douglas was the incumbent, having served since 1847, and he would be re-elected after the debates.

Slavery and states’ rights were major topics during this series of seven debates. Lincoln’s performance raised his national profile to such an extent that he was nominated by the Republicans as their candidate for president in the 1860 election.

In that race, there were three major candidates in addition to Lincoln. One of them was Stephen Douglas of the Northern Democratic Party. Douglas received the second highest number of popular votes. Lincoln received the most popular votes. He also carried 18 states while Douglas carried only one (Missouri). The other two candidates together carried 14, and Lincoln won in the electoral college.

For the contest, put yourself in Lincoln’s bow tie, and tell me what you think he might be saying or thinking about the issues of the day, the match-up with Douglas, the state of our world today, the commemorative stamp, stamp collecting, postal policy, politics, or anything else that appeals to you.

For each winner, the prize will be a 13-week subscription to Linn’s (a new subscription or an extension). Entries must reach me no later than April 24.