Lincoln stamps used in Nicaragua for more than a decade

Nicaragua’s 1.05-cordoba Lincoln airmail stamp was revalued to 1cor with two different overprints, in 1962 and 1968. 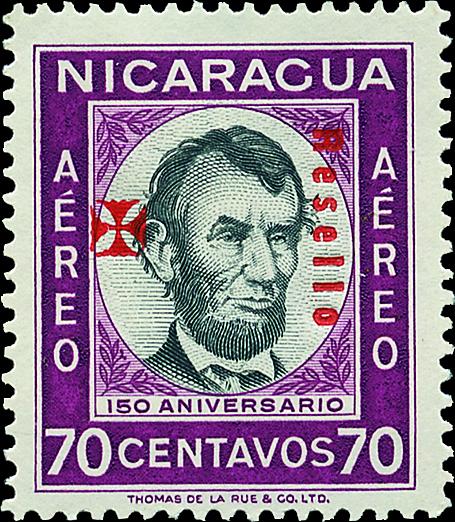 Stamps from Nicaragua’s Lincoln issue were overprinted in September 1960 for the benefit of victims of the 1960 Great Chile Earthquake. 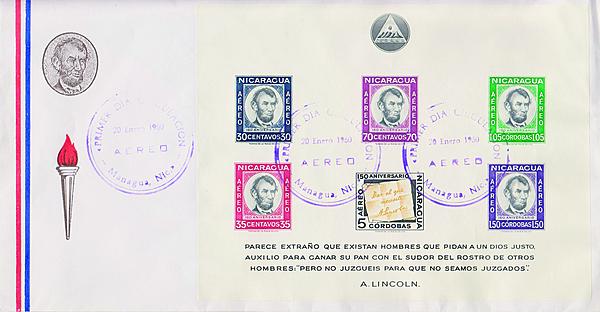 A first-day cover shows the airmail stamps imperforate in a souvenir sheet. The cover is postmarked Jan. 20, 1960. 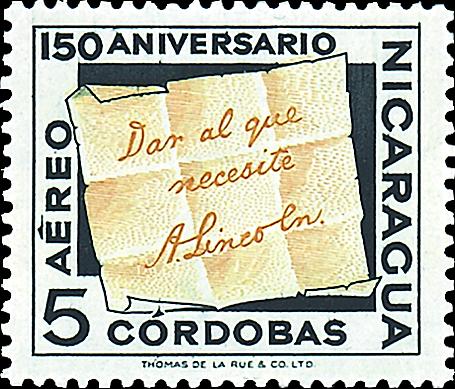 The 5-cordoba airmail stamp has a design showing a document with text and Lincoln’s signature.

Nicaragua issued 11 stamps and two souvenir sheets in 1960 to commemorate the 150th anniversary of the birth of Abraham Lincoln.

The 150th anniversary of the end of the United States Civil War will take place in 2015.

It was a terrible war. Many families, including those of Robert E. Lee and Stonewall Jackson, found themselves with family members on opposite sides: one Confederate, one Union.

The war is thought of by many as the war that ended slavery, but it didn’t start out that way: It was a war to preserve the Union.

Among many countries honoring Abraham Lincoln and the end of slavery was Nicaragua, which issued a set of 11 stamps (Scott 824-828, C437-C442) and two imperforate souvenir sheets (828a, C442a) commemorating Lincoln’s 150th birth anniversary.

These stamps and their engraved designs were recess (intaglio) printed by Thomas de la Rue Ltd. of London.

The image of Lincoln shown on the stamps appears to be based upon a photograph taken Feb. 9, 1860. Just the head was used in the stamp design, and the hair is slightly mussed up, perhaps to avoid a copyright infringement. At any rate, it is a fine portrait, certainly among the most attractive of the Lincoln stamps of this period.

The regular postage stamps in the set are inscribed “correo,” and the airmails carry the inscription “aereo.”

The 5-cordoba top value of the airmail set has a different design: an unfolded document with words in handwriting similar to Lincoln’s, and with his signature, but with the text written in Spanish: “Dar al que necesite” (Scott C442).

The World Airmail Catalogue bySanabria reveals that the airmail stamps were issued in quantities of 875,000 for the 30-centavo value to 175,000 for the 2cor stamp. There were 20,000 airmail souvenir sheets produced.

The Managua postmark on the first-day cover for the airmail souvenir sheet reveals that it was issued Jan. 20, 1960, although the Scott Standard Postage Stamp Catalogue and some other catalogs list the issue date as Jan. 21.

The text at the bottom of the souvenir sheet is a Spanish translation of Lincoln’s words from his second inaugural address: “It may seem strange that any men should dare to ask a just God’s assistance in wringing their bread from the sweat of other men’s faces; but let us judge not that we be not judged.”

In September 1960, the stamps, but not the souvenir sheets, were overprinted with a red cross and the word “Resello” (“overprint”) for the benefit of victims of the 1960 Great Chile Earthquake, the world’s largest recorded earthquake (Scott 829-833, C446-C451).There were 25,000 stamps of each airmail value.

The overprinted stamps are neither postal tax stamps nor semipostals, which is unusual for an issue of stamps intended to benefit a cause.

An additional five surcharges were applied to airmail stamps from the set between 1962 and 1971.

The 1.05cor airmail stamp was revalued with a red overprint to 1cor in 1962 (Scott C500). Six years later, the same stamp received the same surcharge, but in a different format, with the top line and bottom line much closer together (C637).

In 1971, an overprint converted the 1.50cor airmail stamp to a new 15c value (Scott C753). Unlike the previous surcharges, this overprint is in black, and also includes bars at lower left and right to obliterate the stamp’s earlier inscribed value.