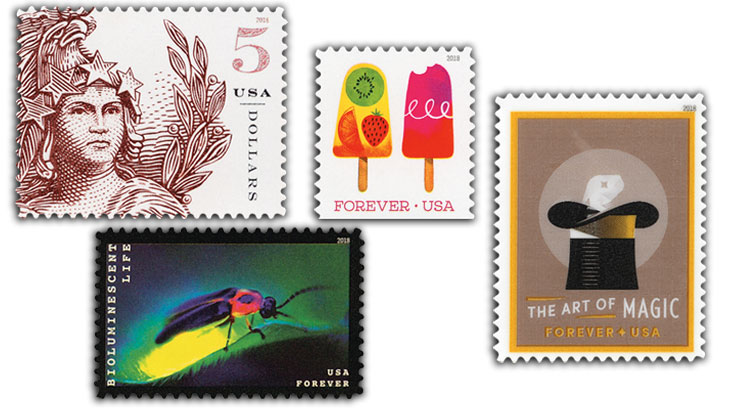 Printing innovations were used on multiple United States stamp issues in 2018, including lenticular motion on the Art of Magic souvenir sheet, a sparkling reflective effect on the Bioluminescent Life commemorative stamps, a scratch-and-sniff component on

In 2018, the United States Postal Service issued 105 varieties of stamps and postal stationery, including 70 commemoratives, 28 definitives, eight special stamps for occasions such as holidays and weddings, and one stamped envelope. The total compares to 128 varieties in 2017 and 154 in 2016.

Unless otherwise specified, the stamps described below are denominated “forever,” meaning they will always be valid for the current first-class 1-ounce letter mail rate. One such item, the 2018 Love Flourishes stamp, covered a 49¢ rate on its Jan. 18 date of issue. Three days later, when the first-class rate went up by a penny, its cost and postage value rose to 50¢.

As it did in 2017, the Postal Service this year issued stamps featuring innovative printing techniques, including a stamp with a lenticular motion effect that made a white rabbit appear to pop out of a magician’s top hat when the stamp is rotated.

The moving bunny was found only on the three stamps of a souvenir sheet that accompanied a five-stamp set called The Art of Magic that depict classic magicians’ tricks. The similar stamps on the full pane of 20 show a motionless rabbit peering out of the hat. The other four varieties on the pane show a fortune-teller with a crystal ball, a woman floating in midair, an empty birdcage, and the missing bird from the cage emerging from a flower.

The Postal Service also produced a pane of 10 Frozen Treats stamps with a fruity-smelling scratch-and-sniff coating. The American Lung Association made an unsuccessful late appeal to stop the stamps’ issuance, warning that the chemicals that produce the fragrances “may pose a risk for serious health problems,” but a Postal Service spokesman said the company that supplied the scratch-and-sniff coatings and print varnish “complies with all the safety requirements listed in the Consumer Product Safety Improvement Act.”

Yet another production innovation was hot foil stamping, used in printing four commemorative varieties in a pane of 16 that presented stylized images of mythical dragons in fanciful settings, digitally created by Don Clark.

The year’s largest set, O Beautiful, was a pane of 20 different designs issued on the Fourth of July. The commemoratives display photographs reflecting the lyrics of America the Beautiful, which were first published as a poem by Katherine Lee Bates in 1895. The first-day ceremony was held in Colorado Springs, Colo., in sight of Pike’s Peak, where in 1893 Bates was inspired to write the poem.

Most of the photos were of scenic vistas in the American West, with each of the five rows of stamps on the pane illustrating one of five phrases from the song’s first verse: spacious skies, waves of grain, mountain majesties, the fruited plain and sea to shining sea.

Ten commemorative varieties in a 20-stamp pane celebrate bioluminescent life, creatures or flora living on the land or in the sea that emit light when the surrounding environment is dark. A color photograph of each specimen is shown against a solid black background, with typography in white. The bioluminescent animals depicted range from a single firefly to a deep-sea octopus. Land-based flora are represented by a small cluster of mushrooms radiating a green glow.

Another 10-design commemorative set marks the 50th anniversary of Hot Wheels, the die-cast toy car line from Mattel. Each stamp bears a photograph of a different car on the distinctive orange Hot Wheels racetrack and its model name, including Purple Passion, Rocket-Bye-Baby, Rodger Dodger and Rigor Motor.

The eighth entry in the U.S. Music Icons series, and the first to include multiple varieties, honors songwriter and musician John Lennon of the famed British quartet the Beatles. Lennon’s portrait and signature are shown on stamps arranged on a pane in four rows that are tinted by a range of gradient colors starting with orange in the top row and ending with blue at the bottom, resulting in four distinct color varieties. (The Beatles were honored on a 1999 stamp in the Celebrate the Century commemorative series. That stamp depicts a cartoon image of a yellow submarine, evoking one of the group’s best-known songs and films.)

The centennial of the U.S. Post Office Department’s pioneering airmail service between Washington, D.C., and New York was commemorated with two stamps  bearing the same intaglio-printed design, one in blue and the other in red, depicting a Curtiss JN-4H Jenny, the plane used by U.S. Army pilots in 1918 to fly the mail.

Several commemoratives were issued as singles. One pictures a World War I American doughboy holding a flagpole with a U.S. flag. This stamp marks the centennial of that conflict’s final year, in which U.S. entry on the side of the Allies turned the tide and ensured an Allied victory.

Another shows Scooby-Doo, a Great Dane who has solved mysteries in various television series, animated films and comic books for nearly 50 years. The stamp was issued July 14 as part of the Scooby-Doo Doo Good program’s effort to encourage young people to improve the environment. Its print order of 252 million was unusually large for a current U.S. commemorative.

Making their U.S. stamp debuts were Fred Rogers, whose Mister Rogers’ Neighborhood children’s television show celebrates its 50th anniversary this year; astronaut Sally Ride, whose 1983 flight as a mission specialist on the space shuttle Challenger made her not only the first American woman in orbit but also, at 32, the youngest U.S. space traveler, a distinction she still holds; and entertainment superstar Lena Horne, honored on the 41st stamp in the Black Heritage series, which began in 1978 with a 13¢ stamp depicting abolitionist Harriet Tubman.

The bicentennial of the Flag Act of 1818, which defined how Old Glory would look and how it would evolve as the nation expanded, was commemorated with a stamp showing a graphic representation by Kit Hinrichs of the flag it produced: 13 horizontal red and white stripes, the same as today, to represent the original colonies, and 20 stars on a blue field representing the 20 states then in the union.

The tradition of honoring individual states on its statehood anniversaries continued with a commemorative for the 200th year of Illinois. This vertical stamp, illustrated by Michael Konetzka, shows an outline map in blue with a series of yellow beams radiating upward like the rays of a rising sun. Illinois’ first statehood stamp, a 6¢ commemorative issued 50 years earlier, shows farm buildings and fields of grain.

A single stamp honors the nation’s first responders and pictures a firefighter, an emergency medical services worker and a law-enforcement officer, tinted red, white and blue and moving forward against a black background and a wisp of smoke.

Several special stamps were issued for the end-of-year holidays, headed by the latest entry in the oldest U.S. holiday series, the traditional Christmas stamp. Depicting Mary and the infant Jesus, it features a detail from an oil-and-gold panel painting by the Italian Renaissance artist known as Bachiacca that dates from the early 1520s and hangs in New York City’s Metropolitan Museum of Art.

The contemporary Christmas set pays tribute to the image of Santa Claus as it was refined and promoted since 1931 by the Coca-Cola Co., with designs derived from archived artwork produced by Haddon Sundblom. This Sparkling Holidays Santa set includes four stamps showing portraits of Santa from paintings commissioned by the company for its holiday advertising, plus a fifth stamp in a souvenir sheet depicting him admiring a note from a youngster beside a bottle of Coca-Cola left for him on the fireplace mantel.

The Postal Service celebrates Hanukkah with a stamp depicting a menorah and related images created by artist Tamar Fishman using the techniques of the Jewish folk art of paper cutting. It was part of a joint issue with Israel, the second such partnership between the two countries that honored the Jewish Festival of Lights.

Another stamp shows a father, mother and child celebrating Kwanzaa. The wintertime holiday drawing on African traditions was created in 1966 during the height of the Black Freedom Movement.

The seventh in a series of round stamps fulfilling the 1-ounce letter rate to international destinations, in this case, $1.15, bears a photograph of a Christmas poinsettia.

Four se-tenant Birds in Winter stamps depict a black-capped chickadee, a northern cardinal and a blue jay perched on tree branches and a red-bellied woodpecker clinging to a tree trunk. The digitally produced images are based on illustrations by Nadia Taylor of London, England.

The annual definitive set depicting the U.S. flag consists of four varieties from coil rolls of 100 by Ashton Potter and Banknote Corporation of America and double-sided panes of 20 made by the same two contract printers. They bear the same basic design by Kit Hinrichs, a graphic representation of Old Glory with two sharp vertical folds that recall his design for the Flag Act commemorative of four months earlier.

Each stamp in a set of three printed by intaglio and denominated $1, $2 and $5 displays the head of the statue of Freedom standing at the top of the U.S. Capitol dome. This design recalls the image on a stamp issued nearly a century earlier, the red and blue $5 definitive of 1923. The three 2018 Statue of Freedom stamps also include a printing innovation for U.S. stamps: Optically variable ink was used for the denominations.

A coil stamp, the seventh stamp in the Fruit definitive series, is denominated 2¢ and pictures a Meyer lemon and two wedges cut from another lemon. Like the other stamps in this series, the design is based on artwork by John Burgoyne.

A single definitive in booklet form shows a close-up photo by Richard C. Baer of a hybrid flower called a peace rose.

As usual in recent years, the 2018 program included a pair of high-denominated stamps for expedited mail services. A $6.70 Priority Mail stamp depicts Byodo-In Temple in the Valley of the Temples Memorial Park in Kahaluu, Hawaii, while a $24.70 stamp for Priority Mail Express domestic overnight service bears a $24.70 denomination — the highest ever to appear on a U.S. regular postage stamp — and shows a sunset view of the Sleeping Bear Dunes on the southeast shore of Lake Michigan. They are the 19th and 20th stamps in the American Landmarks series that began in 2008, and, like the others in this series, feature digital images by Dan Cosgrove.

The year’s only postal stationery item, a large envelope with a $6.70 denomination intended for Priority Mail, also displays Cosgrove’s illustration of the Byodo-in Temple.

Images of all of the 2018 stamps appear in the Dec. 17 issue. Cast your vote online here.