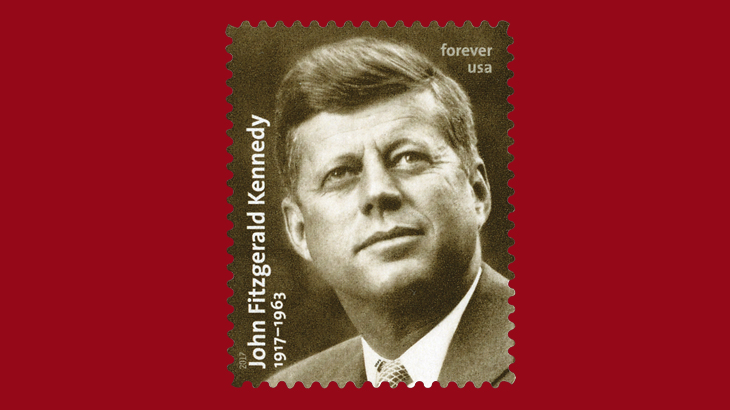 The birth centenary of President John F. Kennedy was one of several historic anniversaries celebrated on United States stamps in 2017. 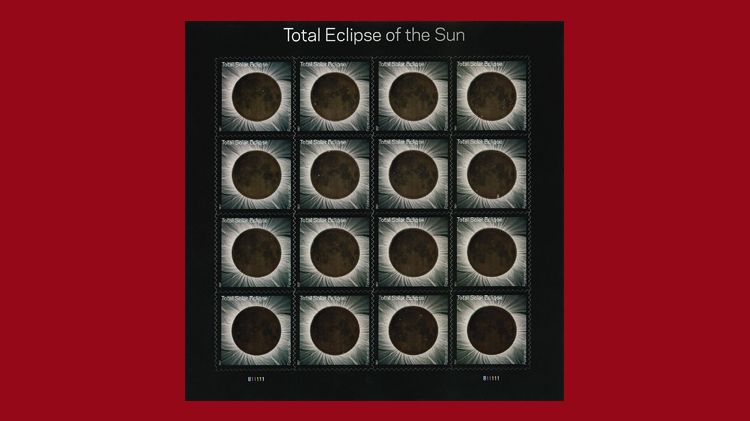 Collectors enjoyed innovative printing on the Total Solar Eclipse forever stamp in 2017: heat-sensitive ink in the central black disc revealed a full moon when warmed by human touch.
Previous
Next

A semipostal stamp was the first new U.S. entry of its kind since 2011.

The count is well below the 154 produced in 2016, and is the smallest annual total since the 110 of 2010. As usual, many varieties are nondenominated forever stamps that will always be valid postage for their category of mail.

For the first time since 2011, USPS created no imperforates — stamps without die cuts — for sale in uncut press sheets on a limited basis at face value. Between 2012 and 2015, it made and sold numerous such varieties, and the Scott stamp catalogs assigned minor-letter listings to them.

Vote in the Linn’s Stamp News

The Postal Service’s production and sale of large press sheets containing conventional die-cut stamps has continued at the same rate, but last year the number of issues that also were created imperforate was reduced from 62 the previous year to 15. Although the USPS promised a statement by the end of 2016 on the future of its practice of deliberately creating imperfs specifically for collectors, it has not yet been made.

This year’s semipostal stamp was created to raise funds to combat Alzheimer’s disease. Its design recycles artist Matt Mahurin’s artwork for the 42¢ Alzheimer’s Awareness commemorative of 2008 but reverses the image of the female patient and her caregiver so that both face right instead of left. The nondenominated stamp sells for 60¢, of which 49¢ covers the first-class letter rate (although that rate is expected to rise to 50¢ Jan. 21, 2018).

The remaining 11¢ surtax is earmarked for efforts funded by the U.S. Department of Health and Human Services to find ways to prevent and treat Alzheimer’s, a form of dementia that takes a particularly heavy toll among the elderly.

The most unusual issue of 2017 was a forever stamp issued June 20 in a pane of 20 to commemorate the total solar eclipse that would be seen Aug. 21 along a transcontinental band from Oregon to South Carolina. The stamp was printed in part with a heat-reactive thermochromic ink not previously used in U.S. stamp production.

The stamp depicted what observers would see in the brief time that the moon completely obscured the sun: a black disc surrounded by the solar corona, which is invisible under any other conditions. However, when the printed disc on the stamp is warmed, as by the touch of a finger, the black color fades and the moon’s familiar surface features are revealed. When the stamp cools, the image darkens again.

Some collectors complained that the mint panes had ripples that prevented them from lying flat. The rippling was attributed to a layering process used by the printer, Banknote Corporation of America, to apply the special ink.

The Postal Service used another novel printing technique to produce a pane of 16 round Have a Ball commemoratives, with two each depicting a football (shown from the end), volleyball, soccer ball, golf ball, baseball, basketball, tennis ball and kickball.

The printer, Ashton Potter USA Ltd., applied a special coating to each stamp to create a surface texture mimicking its subject’s characteristics, such as the golf ball’s dimples, the baseball’s stitching and the raised pattern of alternating line groups on the pink playground kickball.

The glossy coating of the stamps can be viewed when they are held at a slight angle, and the raised textures can be felt with the fingers. The printer used an unusual spot tagging on the panes that encircles the round design of each ball, causing only the frame of the stamp to glow yellow-green when exposed to shortwave ultraviolet light.

The commemorative category features four sets of 10 or more stamps each.

The largest, with 12 stamps, shows details from the paintings of a 20th-century American artist, Andrew Wyeth, on a pane with a wide illustrative border. The artwork of Andrew’s father, N.C. Wyeth, and his son, James (Jamie) Wyeth, had previously been shown on U.S. postage.

Fashion designer Oscar de la Renta was honored with a pane of 11 varieties, one bearing his portrait and the others showing details from a selection of his gowns. A set of 10 depicts movie villains created by the animators of the Disney studios, including Captain Hook, Cruella De Vil and the queen from Snow White, while another displays posters dating to the Works Progress Administration of President Franklin D. Roosevelt’s New Deal.

Sharks are featured in a set of five, each depicting a species of the intimidating fish — including the most notorious, the great white — swimming in the blue depths. Late in the year, a pair of commemoratives for the history of hockey was issued as part of a joint issue with Canada Post, with each country’s set available in a souvenir sheet of two as well as in a larger format: a pane of 20 for the United States and a booklet of 10 for Canada. The sets use similar paired designs arranged tete-beche to produce mirrored images.

The 40th stamp in the Black Heritage series honors civil rights advocate Dorothy Height, who died in 2010 at age 98 after a lifetime of leadership in the national effort to ensure equal rights for minorities. Height had served as a consultant for the USPS in planning the 10 To Form a More Perfect Union stamps of 2005 that illustrate milestones in the civil rights movement (Scott 3937).

The first stamp of 2017, to mark the Year of the Rooster, was the 10th in the annual series celebrating the Lunar New Year and featuring the artwork of artist Kam Mak. The bicentennial of Mississippi statehood and the sesquicentennial of Nebraska were the subjects of the latest in a line of commemoratives that began in 1935 to mark significant anniversaries of U.S. states; 50 years earlier, Nebraska and Mississippi were honored on their 100th and 150th birthdays, respectively (Scott 1328 and 1337).

Another repeat subject of a commemorative was Henry David Thoreau, author of Walden and Civil Disobedience, on his 200th birth anniversary. In 1967, a 5¢ stamp had marked Thoreau’s 150th birthday (Scott 1327). The new stamp was not part of the Literary Arts series, which the USPS has used in recent years for forever stamps that prepay the 3-ounce first-class postal rate.

Single commemoratives also marked the opening of the National Museum of African-American History and Culture in Washington, D.C., and honored Father Theodore Hesburgh, long-time president of the University of Notre Dame.

Hesburgh’s stamp, produced both in panes of 20 and coils of 50, appeared only two and a half years after the educator’s death; beginning next year, the waiting period for stamp honors after the subject’s demise will be set at three years.

The centennial of the birth of President John F. Kennedy brought forth a forever stamp issued in panes of 12 with a wide illustrated border. It is the fourth appearance on a U.S. stamp for the nation’s 35th chief executive, who was assassinated in 1963.

The year saw no new stamp in the Legends of Hollywood series, which began in 1995 and in most years has produced a single commemorative honoring a film star. The Music Icons series also had no new entry.

The largest set of special stamps was the traditional Christmas block of four, which celebrates the popular Christmas carols Deck the Halls, Silent Night, Jingle Bells and Jolly Old St. Nicholas with a few words from the featured song in each stamp’s design.

The 2017 Love stamp depicts a small white airplane spelling out “Love” in skywriting against a blue-sky background. There also are two specials primarily intended for use with wedding invitations, one for the first-class 1-ounce rate showing a man’s floral boutonniere, the other for the 2-ounce rate depicting a woman’s corsage.

The year’s definitives include five varieties of a Flag forever stamp in multiple formats to cover the first-class rate, which was raised from 47¢ to 49¢ Jan. 22. Displaying a closely cropped photograph by Tom Grill of the fluttering Stars and Stripes, it was produced in panes and coils for over-the-counter sale and also in ATM-vended panes.

Four designs depicting still life paintings of mixed garden flowers in vases were used for forever stamps produced in double-sided panes of 20 and large coil rolls. Because the coil stamps are smaller than those from the panes, their artwork is arranged and cropped differently, creating a total of eight varieties that are easy to tell apart.

Another definitive set with appeal to gardeners, Protect Pollinators, consists of five designs picturing a Western honeybee or a monarch butterfly pollinating a variety of plants native to North America. The set marks a return to a postal theme that the USPS had introduced 10 years earlier with a quartet of stamps showing the pollination of flowers by bees, butterflies, bats and hummingbirds (Scott 4153-4156).

A quartet of stamps reproduces scenes from the classic 1962 children’s book The Snowy Day. Written and illustrated by Ezra Jack Keats, the book features an African-American boy in a red snowsuit and won the Randolph Caldecott Medal for the year’s most distinguished picture book for children.

The Fruits series of low-denomination stamps, which began with a trio in 2016, added three more in 2017: 5¢ and 10¢ stamps in panes depicting pinot noir grapes and red pears, respectively (both designs had been issued in coil form the year before) and a 3¢ stamp in coils of 10,000 showing strawberries. Artist John Burgoyne, as before, provided the images.

A nondenominated (70¢) 2-ounce-rate forever stamp honors educator Robert Panara, who advanced innovative techniques for teaching the deaf. The stamp is the 16th in the Distinguished Americans series, which was launched in 2000 with a 10¢ stamp honoring Gen. Joseph W. Stilwell and replaced the long-running Great Americans set.

The USPS issued the sixth in an ongoing series of round global forever stamps that will always be valid for first-class international mail weighing one ounce or less. The nondenominated stamp sold for $1.15 when issued and depicts an echevaria, a green succulent or drought-resistant plant.

There also are nondenominated stamps depicting four different seashells and bearing the word “Postcard,” meaning they will always fulfill the current rate for that category. The shells, all native to North American waters, are the queen conch, the Pacific calico scallop, the alphabet cone and the zebra nerite, as illustrated by artist Sergio Baradat.

The USPS issued new stamps in the American Landmarks series denominated $6.65 and $23.75, the revised rates for Priority Mail and Priority Mail Express. The images, of Liliuokalani Gardens in Hilo, Hawaii, and the Gateway Arch in St. Louis, respectively, are the work of Dan Cosgrove of Chicago, who has illustrated every stamp in the series since it began in 2008. Both of the new stamps were issued in panes of four; previous Landmarks stamps had come in panes of 20 or 10.

The Gateway Arch stamp was the highest priced regular stamp in U.S. history, a distinction that is passed on each time the Express Mail rate is increased.

The Postal Service tweaked the design of the nondenominated (5¢) USA Star coil stamp it had issued in 2016 by slightly shrinking the central design and adding a blue frame along the outer edges. The 2016 USA Star stamp had been produced only in self-adhesive coils of 10,000 for use by nonprofit organizations, but the new design was used for coils of both 3,000 and 10,000.

A nondenominated (49¢) forever stamped envelope that the Postal Service erroneously reported issued on Jan. 8, 2017, actually turned out to have been issued Nov. 3, 2016. It was not listed for sale from USPS Stamp Fulfillment Services until January, and is included in this year’s poll. The envelope’s imprinted image repeats the design of the Northern Cardinal forever stamp that was issued Aug. 4, 2016, as part of a set of four Songbirds in Snow stamps (Scott 5128).

The year’s lone U.S. postal card, issued as a single and a double-reply card, bears an imprinted stamp with an illustration of a Chilean blue crocus by artist Dugald Stermer.