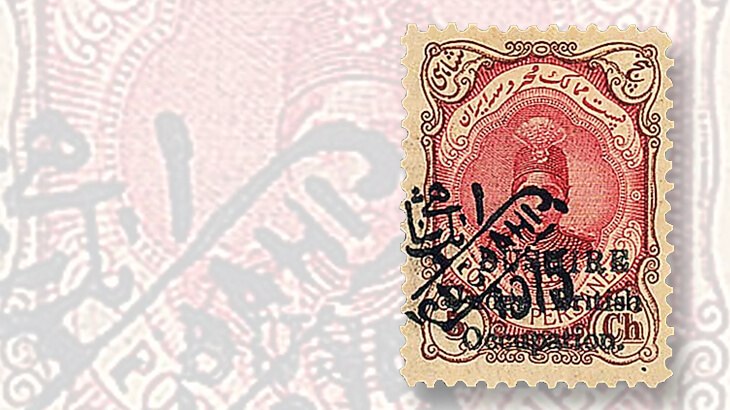 Once thought a forgery but vindicated by new scholarship, this surcharged and overprinted Persian stamp used in Bushire under British occupation in 1915 (Iran Scott 537) sold for $9,400 at Argyll Etkin’s sale in March. 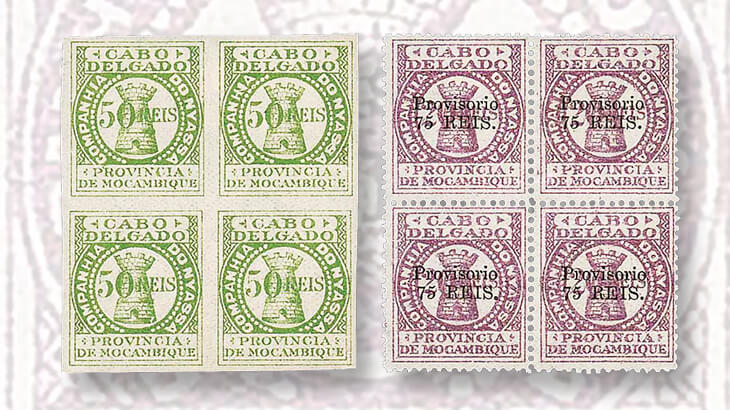 From the John Dahl collection, these blocks of the 1891 Rook bogus issue of Nyassa were offered by Argyll Etkin in March. The full lot of 58 stamps sold for $685. 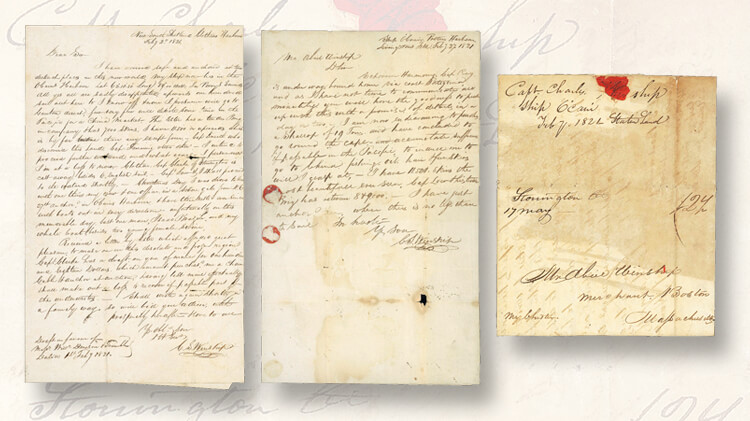 Three 1821 letters from the South Shetlands to Boston, among the earliest known from the region, were offered by Argyll Etkin in London in March. The full lot of seven letters sold for about $37,650 — well above the estimate.
Previous
Next

Argyll Etkin held an auction of worldwide stamps and postal history in London March 4, featuring material from a specialized collection of the Portuguese colony of Nyassa.

The top lot was a correspondence of seven letters, including three of the earliest-known letters from the bottom of the world.

Sent in 1821 by the captain of a New England sealing ship to his father in Boston, they are datelined at Livingston Island in the South Shetlands, in what would later be called the Falkland Island Dependencies. The South Atlantic archipelago is now included in the British Antarctic Territory.

The South Shetlands had only just been discovered — or perhaps rediscovered — in 1819 by British and American naval excursions, meaning the letters offered in the Etkin sale were written within two years of the islands’ first documented sighting by Europeans.

It is remarkable how fast the adventurers swooped in to try to get rich.

He went on to describe the scene: “This country is subject to volcanoes, some which we have discerned in all its brilliancy … Seals and Sea Elephants are the only monsters to be found … In fact the whole country is covered in ice, some perpendicular 1,000 high.”

A stamp described as “a key rarity of Bushire” and one of just four examples produced has been the subject of some controversy in recent years.

British forces occupied the Persian seaport of Bushire (modern-day Bushehr, Iran) in August 1915 and held it for two months.

During their time in the city, once a key maritime stopover on the route from Suez to India, the British issued two lengthy sets of definitives, consisting of Persian stamps overprinted “Bushire under British Occupation.”

One of the stamps to which the overprint was applied was the 1-chahi on 5ch surcharge of the Ahmad Shah Qajar issue of 1915 (Iran Scott 537).

This stamp is mentioned in the Scott Standard Postage Stamp Catalogue in a footnote after Bushire Scott N14 as being considered a forgery.

Gibbons has since reinstated the stamp on the strength of new scholarship, and the example in the Argyll Etkin sale received a British Philatelic Association certificate of authenticity in 2015. It sold for $9,400.

A spokesman for the auction house said the consignor was a specialist in Iranian philately who is now in his 90s and dispersing his collection because of failing eyesight.

The following lot consisted not of stamps or postal history, but an extensive and detailed file of reference notes from the same collector, with good photocopies identifying the Bushire overprints as well as the underlying Iranian stamps by plate position.

Estimated at £100 to £150, the sheaf sold for 10 times that — more than $2,200 — after spirited bidding from several overseas collectors and at least one expertizing group.

The Argyll Etkin sale also included stamps and postal history from the John Dahl collection of Portuguese Nyassa, a former colony on the southeast coast of Africa that is now part of Mozambique.

One of the more intriguing lots was a set of six bogus stamps, both perforated and imperforate in singles, pairs or blocks of four, including some with surcharges and “Provisorio” overprints, that were issued in 1891 by the London office of the Nyassa Co. but later disavowed by the Portuguese government.

The stamps, known as the Rook issue, depict a castle turret surrounded by a value and the words “Companhia do Nyassa,” with “Cabo Delgado” above and “Provincia de Mocambique” below.

The Etkin sale catalog includes an intriguing note, “The famous Tapling collection, bequeathed to the British Library in 1891, contains only these stamps for Portuguese Nyassa.”

After the Portuguese government declared the stamps invalid, many collectors apparently returned the stamps to the London office of the Nyassa Co. for a refund, and only a small number were saved. The lot in the Argyll Etkin sale, containing a total of 58 stamps, brought $685.

The first authorized issues of Nyassa appeared in 1898.

The Dahl collection contained extensive studies of the attractive set of bicolor pictorials that appeared in 1901. These became popular with collectors and went through several printings throughout the 1920s, despite seeing limited postal use.

Further stamps from the Dahl collection will be offered in September.

Portugal's 1924 Camoens set of 31 stamps failed as a fundraiser: Classic Stamps of the World