What is Alexander Hamilton saying on this stamp? 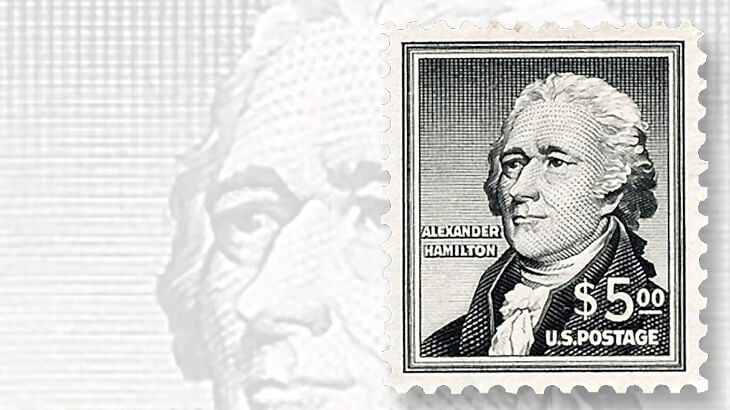 The cartoon caption contest stamp for February is the 1956 $5 Alexander Hamilton stamp in the Liberty series. One of our most prominent Founding Fathers, Hamilton is alive these days on the Broadway stage in the hit musical Hamilton. Put yourself in Hamil

It is a handsome portrayal, based on the 1806 painting by John Trumbull, and we will use it as the February cartoon caption contest stamp.

A Founding Father of the United States, Hamilton promoted and defended the Constitution via his writings in The Federalist Papers.

He also was the architect of the U.S. financial system, served as first secretary of the Treasury under President George Washington, and founded the U.S. Coast Guard and The New York Post newspaper.

Though 212 years in the grave, Hamilton is now enjoying a revival in the mind of the American public, thanks to the Broadway musical Hamilton, inspired by the 2004 biography by historian Ron Chernow.

The musical, by Lin-Manuel Miranda, has been both a critical and popular success since its opening in 2015.

If you can suspend disbelief long enough to translate that image on the $5 stamp to a singing character on the stage, perhaps the musical is for you. But be prepared to shell out $200 (if you can find tickets at all) for just the cheap seats.

For this month’s cartoon caption contest, transport yourself back to around 1800, and let me know what you believe Hamilton might be saying or thinking about the newly minted United States, his appearances on U.S. stamps, or his place in the pantheon of Founding Fathers.

Alternatively, you might have him address the current political situation, his musical, or the U.S. Postal Service.

To be considered for the prizes, entries must reach me no later than Feb. 24.