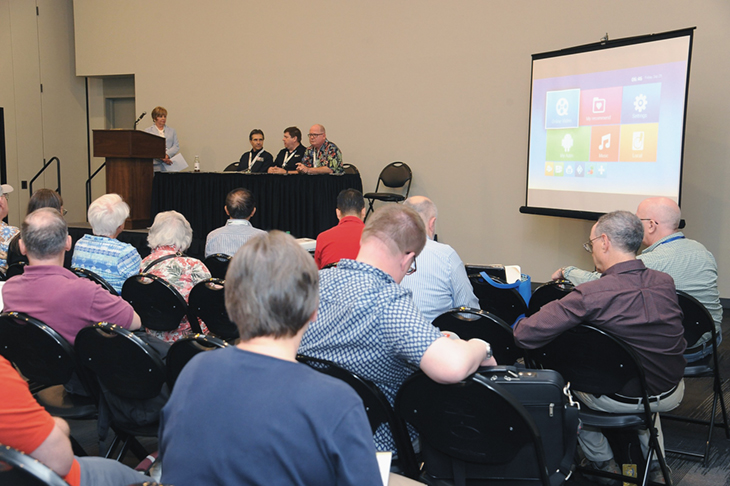 Linn’s Stamp News and the Linn’s Editorial Advisory Board sponsored its second the State of the Stamp Hobby panel discussion on May 29 during World Stamp Show-NY 2016 at the Javits Convention Center in New York City.

The panel discussion attracted a standing-room-only crowd, and sparked a lively discussion among the panel and the audience.

The discussion quickly centered on the stamp hobby and how to attract new collectors.

Several members of the audience expressed concerns about an aging collector base and minimal representation of minorities. One man observed that there were few young people at the show.

Scott Murphy said that in his experience there were more minorities at shows on the West Coast and in the South than at shows held in New York and on the East Coast.

Kim Kellerman mentioned that he collects model trains, and that the emphasis is more on families at the model trains shows. He is talking to organizers of these shows to see how they attract families, which he believes is key to introducing young people to the stamp hobby.

Another audience participant suggested that stamp collecting can be used as part of the curriculum for children who are home-schooled.

Sundman and Murphy revealed that they use stamps on their company mail to expose more people to the hobby. “Customers love it,” Sundman said. “It’s fun to use stamps. Customers tell me, ‘Those stamps are so cool.’ ”

Sundman also said one third of Mystic’s customers are women. He said they collect differently and are more drawn to topical collecting. Kellerman observed that there are more women in the industry today.

Murphy said that he attracts young people with the PSE podcasts on YouTube, where collectors can participate in discussions about the hobby without traveling to stamp shows.

A member of the audience said that he credited stamp grading with revitalizing the hobby.

Kellerman said that his firm’s top three customers are under the age of 50, and that eBay is “huge among young people.”

Other members of the board, including Henry Gitner, John Hotchner, James E. “Jim” Lee and Mark Reasoner, were not able to participate because they were dealing with customers or were otherwise engaged at the show.

Watch for similar panel discussions at stamp shows in the future. If you have a chance to participate, you are sure to find the discussions stimulating and thought-provoking.