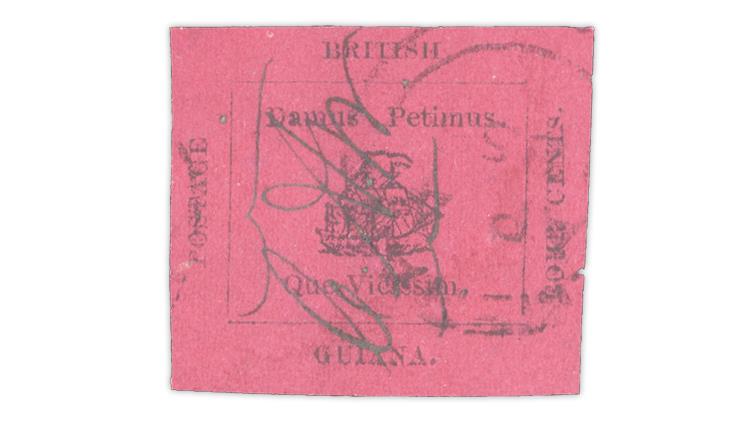 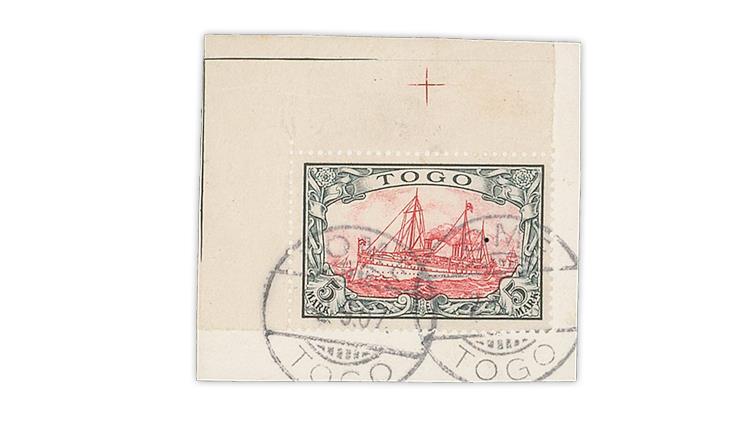 Part 12 of the Lionheart collection of Great Britain and the British Empire will cross the Spink auction block July 15. Among the Togo items up for bids is a used on-piece upper left sheet margin example of the 1900 5-mark slate and carmine stamp picturin
Previous
Next

Spink will conduct three auctions July 13-16 in London that present collectors with numerous opportunities to acquire fine stamps and postal history from all parts of the world.

Spink’s popular Philatelic Collectors’ Series sale will be held July 13-14. It will feature 1,200 lots broken down by country, starting with an affordable 1972 overprint error from Abu Dhabi and concluding with stamps and various postal history collections from Zululand.

One of the three lots of British Guiana to cross the auction block is a handsome used example of the 1856 4-penny black on magenta paper (Scott 14). The stamp bears an indistinct circular datestamp and is initialed “C.A.W.” (C.A. Watson).

Spink describes the stamp as an “unmatched and very fine used example of this scarce stamp without the usual rubbing.”

Expertizing certificates from the Philatelic Foundation (1970) and the British Philatelic Association (2008) accompany the stamp.

Part 12 of the massive Lionheart collection of Great Britain and the British Empire will be offered to bidders July 15.

This part of the collection consists of more than 300 lots from across Great Britain and the former British Empire. According to Spink, among the highlights are specimen stamps, including Ceylon with the 1912-25 1,000-ruble stamp with the broken crown and scroll variety; the Kenya, Uganda And Tanganyika 1922 set with denominations to £100; the rare Straits Settlements 1867 surcharges; a section of Cape of Good Hope Triangles with multiples; and a selection of Canada and provinces airmails.

One of the three lots from Togo is a used on-piece upper left sheet margin example of the 1900 5-mark slate and carmine stamp (Scott 19) picturing the yacht Hohenzollern. Two strikes of a Sept. 2, 1907, Lome, Togo, circular datestamp tie the stamp to the piece.

Stamps and postal history of southeast Asia are the focus of Spink’s July 16 sale. Leading off the auction is “a group of rare British PO [Post Office] in Siam covers and Burma with delightful 1949 essays and proofs,” according to Spink.

Other well-represented areas include Malaya; Straits Settlements; and essays, proofs and trial color proofs from the Federated Malay States.

The auction closes “with a superb collection of Prisoner of War mail, both outgoing and incoming, from Singapore, Burma, Thailand and the infamous Burma-Thailand railway,” according to Spink.