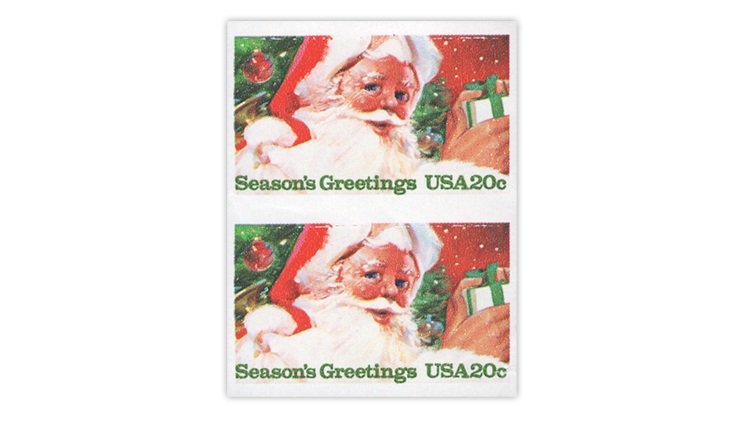 Santa Claus is featured up-close and personal on the United States 1983 20¢ Christmas stamp, shown here as an imperf pair, one of 150-plus known.

One of my favorite living people on United States stamps is Santa Claus. I’m a believer, and my evidence is Francis Pharcellus Church’s iconic 1897 editorial commonly referred to as “Yes, Virginia, there is a Santa Claus” in New York’s The Sun.

The editorial was composed by Church in response to a letter he had received from 8-year-old Virginia O’Hanlon asking if there really is a Santa Claus.

Church’s response nails it, ending with these two paragraphs:

“You may tear apart the baby’s rattle and see what makes the noise inside, but there is a veil covering the unseen world which not the strongest man, nor even the united strength of all the strongest men that ever lived, could tear apart. Only faith, fancy, poetry, love, romance, can push aside that curtain and view and picture the supernal beauty and glory beyond. Is it all real? Ah, VIRGINIA, in all this world there is nothing else real and abiding.

I continue to wonder why the U.S. Postal Service has not seen fit to honor Church and this bit of authentic Americana. For more on the subject, see the U.S. Stamp Notes column in the Dec. 6, 2021, issue of Linn’s. But back to Santa Claus.

One of the best depictions of Santa Claus on U.S. stamps is the 1983 20¢ contemporary Christmas stamp (Scott 2064) shown here. Designed by John Berkey, it is the first up-close picture of Santa’s face to appear on a U.S. Christmas stamp.

The pair of stamps shown is imperforate. The Scott Catalogue of Errors on U.S. Postage Stamps (18th edition, 2021) lists this imperf error and says that 150-plus pairs are known. This would seem to be equivalent to at least six full panes of 50 stamps that have been discovered. But it’s not that simple as some panes have been discovered partially imperf.

The Scott Errors catalog values an imperf pair at $100. The value is italics, which, according to the catalog, means it is an “editor’s estimate where no price information is available.”

For those interested in imperf errors, I recommend the Errors, Freaks and Oddities Collectors Club, which publishes a quarterly journal with a members’ auction in each issue. You can find much more information including membership details at www.efocc.org.

“Yes, Virginia, there is a Santa Claus.”