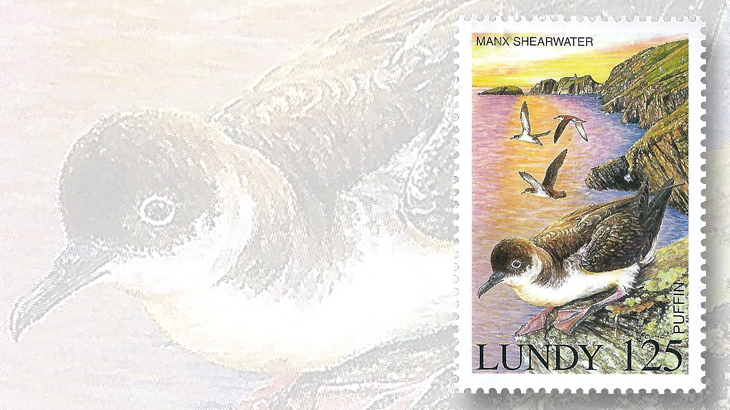 Manx shearwaters are depicted on Lundy’s cliffs on the 125-puffin issue. 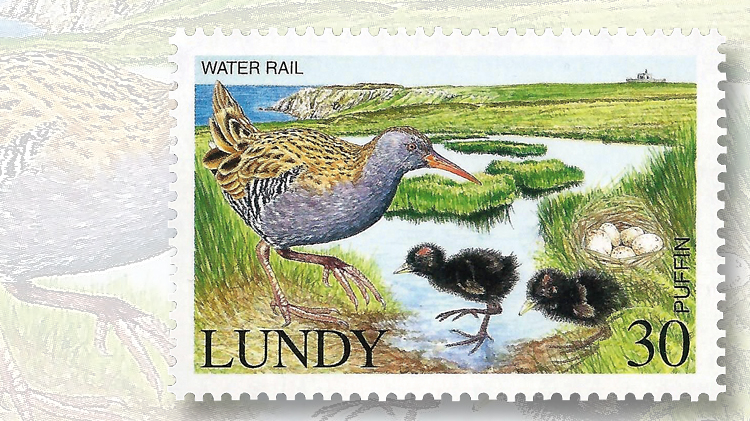 The most recent in a long history of stamps depicting Lundy’s birds were issued in May. The lowest denomination of the five-stamp set shows a water rail and chicks. 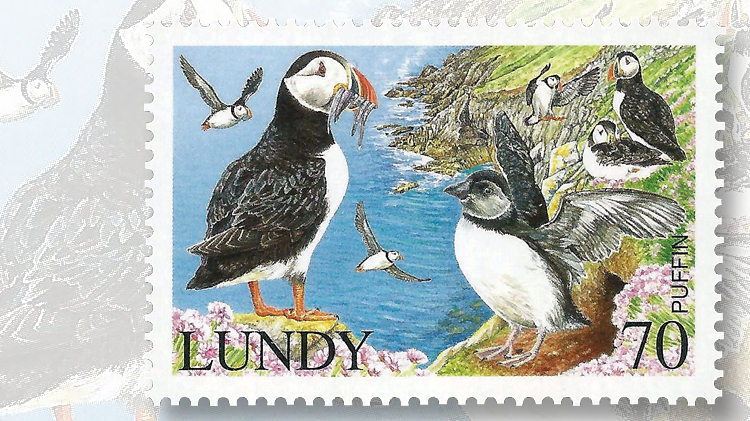 Lundy’s best-known birds, puffins, are depicted on the 70-puffin (first-class letter rate to the United Kingdom) stamp, in their favorite breeding spot at Jenny’s Cove. 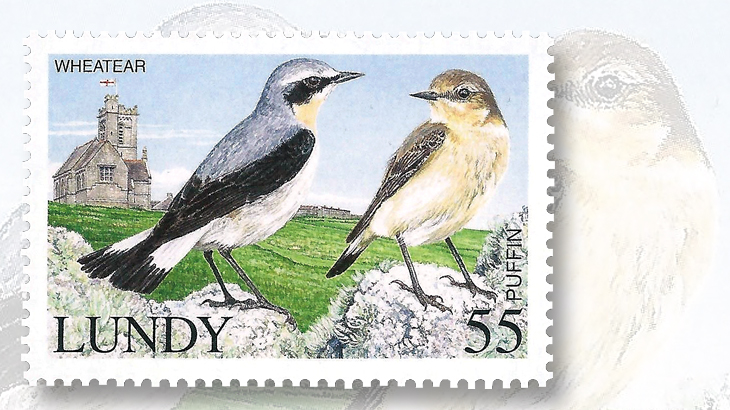 Regional artist Sharon Read did the paintings on which the new Lundy Bird stamps were based. Two wheatears are pictured on the 55-puffin stamps, with a historic church shown in the background. 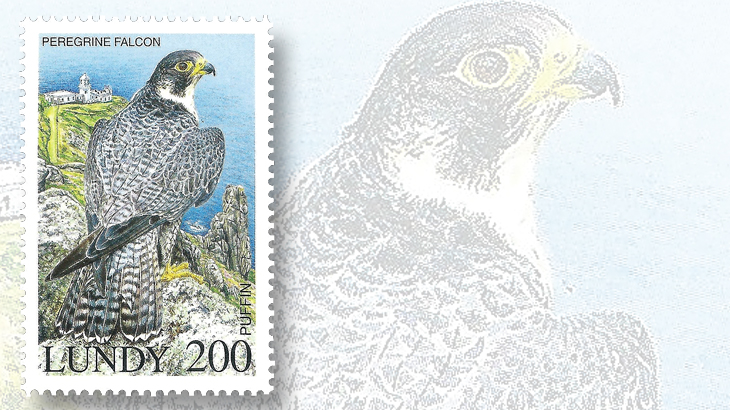 A stately peregrine falcon looks out to sea on the highest denomination of Lunday’s new Bird set: 200 puffins. Cartor printed the set.
Previous
Next

The island of Lundy, located in the Bristol Channel 12 miles off the coast of North Devon in England, has been running its own local post for almost a century.

Stamps have been issued since 1929, paying for carriage between the island and Bideford or Ilfracombe on the British mainland, where the mail is handed over to Royal Mail for onward transmission.

During the summer season the mail is carried by ship, and during the winter a helicopter service operates on Mondays and Fridays.

As a local issue, the stamps are not listed in the Scott Standard Postage Stamp Catalogue, but they have remained popular with collectors for decades.

On May 13 this year, Lundy issued a new set of five Bird stamps. This is most appropriate, because some 35 bird species breed regularly on Lundy. The island’s Old Norse name can be translated as Puffin Island, and puffins always have been associated with this tiny speck of land.

Puffins were depicted on Lundy’s first stamps in 1929, and the birds have since then returned regularly to the island’s stamps. Puffins nest on Lundy in late spring, and Jenny’s Cove is their favorite breeding spot.

Puffins at Jenny’s Cove are depicted on the 70-puffin denomination in the new set. This is the first-class letter rate to destinations in the United Kingdom. The puffin is the local currency unit, and is equal to one British penny.

The designs of the stamps  are based on paintings by local Bideford artist Sharon Read, with assistance from Lars Liwendahl, a Swede who has been deeply involved in Lundy’s stamp program for more than 15 years.

Read is a regular visitor to Lundy and knows the island well, and was asked to depict the birds in actual local settings.

At first, it was intended to include both the English and Latin names of the birds on the stamps, but preliminary designs indicated that too much wording would clutter the designs and the Latin names were removed.

On the 55-puffins stamp a pair of wheatears are shown resting on a stone wall with St. Helena’s Church in the background. The church is in need of rather urgent repairs, and an appeal has been launched to raise the substantial funds required to carry out that work.

Liwendahl traveled to Lundy from his home in Stockholm well ahead of the first day of issue to help local Lundy postmaster Ceri Stafford prepare 500 presentation packs and 1,000 first-day covers.

Lundy is owned by the National Trust and administered by the Landmark Trust. The island has a staff of some 30 people who work hard to provide pleasant stays for the many thousands of visitors who come to Lundy each year. It is a peaceful place, with no radio or television sets in the properties available for rent.

The Marisco Tavern is the hub of the island’s social life. The use of cell phones is not allowed, and there is a £1 ($1.30) fine for anyone using his or her phone in the pub. The tiny village shop also serves as a post office of sorts.

More information about Lundy and its stamps can be found here.

Puffins will appear on Lundy cancel for World Cinderella Congress