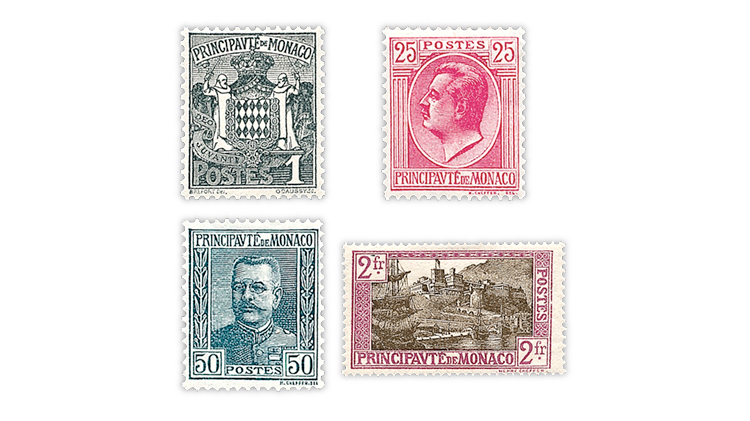 The long set of definitive stamps issued by Monaco from 1924 to 1933 is a good buy at 65 percent to 75 percent of Scott catalog value in both unused, hinged condition and mint, never-hinged condition.

The Principality of Monaco is a sovereign city-state comprising about 0.78 square miles of territory on the Mediterranean coast of France.

With a population of about 38,000, Monaco is a monarchy with a unicameral parliament. It has been ruled by princes from the House of Grimaldi since 1297.

The principality purchased its independence from the Crown of Aragon in 1419. It became a French protectorate in 1630 and has remained closely aligned with France, interrupted by various wars and occupations, ever since.

Monaco issued its first stamps in 1885, and it is one of the original so-called postage stamp kingdoms: small countries that supplemented their income by issuing more stamps than was strictly necessary for postal use primarily for sale to collectors.

Monaco remains a prolific issuer of postage stamps. The production and design values are high, and the issues are attractive.

Stamps of Monaco are generally properly valued in the Scott catalogs. We usually like to tip undervalued issues, but some issues deserve to be tipped even when they are properly valued.

The Scott Classic Specialized Catalogue of Stamps and Covers 1840-1940 values the set at $86.30 in unused, hinged condition and $175 in mint, never-hinged condition. Most of the value is in the five stamps with the highest denominations.