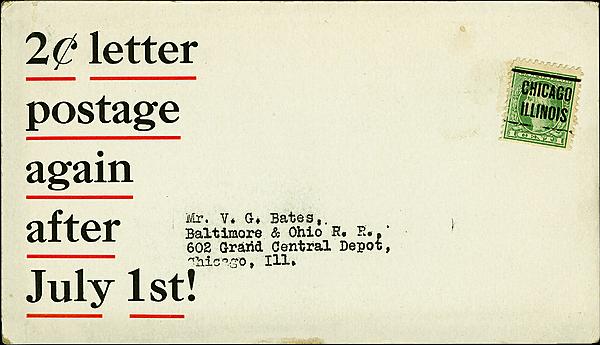 Figure 2. An offset-printed 1¢ George Washington stamp (Scott 525) was used to mail this advertising card in 1919. The message on the card notes the return to pre-World War I postal rates of 2¢ for letters and 1¢ for postcards, and it suggests recipients use the services of the sender to design and execute advertising campaigns. 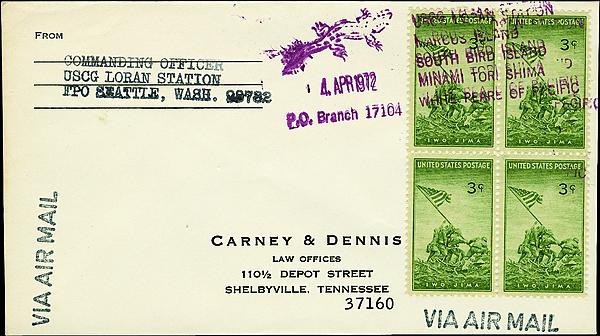 Figure 1. Don’t let the purple alligator fool you — the cancel identifies this cover as being from a United States Coast Guard LORAN (long-range navigation) station in the northwest Pacific Ocean, near Iwo Jima. This 1972 cover is franked with a block of four of the 3¢ Iwo Jima commemorative stamps issued July 11, 1945.

The first thing that jumps out from the cover in Figure 1 is the purple alligator.

What is a LORAN station? The term stands for long-range navigation. This is a navigation system used to determine the position of aircraft or ships when using low-frequency radio signals.

The transmission takes place from land-based radio beacons through the use of a receiver unit.

It has, in recent years, been replaced by Global Positioning Satellite (GPS) technology.

The location in the cancellation is an isolated island near Iwo Jima in the northwestern Pacific Ocean, now known as Minamitorishima. This explains the presence of the block of four of the 1945 3¢ Iwo Jima commemorative stamps, a total of 12¢ in postage, which is 1¢ more than the 11¢ domestic airmail rate in effect from May 16, 1971, to March 1, 1974.

The island was known as Marcus Island while occupied by the United States from 1945 to 1968, when it reverted to Japanese control. The Japanese name translates as “South Bird Island.”

Mail from Coast Guardsmen was taken in and out by a U.S. C-130 military transport that serviced the island once a week. As seen on the cover, incoming mail was addressed care of the Seattle fleet post office. The outgoing mail went into military postal channels at Yokota Air Base, Japan.

When I first saw the cover, my immediate reaction was Florida because of the alligator. It turned out to be a lot more interesting than a domestic cancel.

Recipients often think of it as junk mail, but those who send advertising through the U.S. mails think of it as a service — a means of informing us in a way that is both inexpensive and personal.

A nice window on the process is shown in Figure 2. It is a 1919 mass mailing to potential mass mailers, using an offset-printed 1¢ George Washington stamp (Scott 525), with gauge 11 perforations and a Chicago, Ill., precancel.

The message on the card trumpets the fact that the increased wartime postage rates — 3¢ for a letter and 2¢ for a postcard, to help to pay for U.S. participation in World War I — had been rolled back to 2¢ for letters and 1¢ for postcards, effective July 1, 1919.

Further, the message on the back of the card talks about “big advantages to advertisers” with the return of the old first-class rates. The key message is this:

“No medium of advertising has ever been invented that beats letters for many appeals. Letters have the personal ring of the individual. They deliver with minimum waste...Our organization...in touch with the experiences of hundreds of results, and in contact with scores of constant advertisers has learned valuable experiences that you need and should take advantage of — in your letter advertising or direct advertising...”

Despite rises in postal rates, the message rings true more than 90 years later.

How do I know? If direct mail advertising did not work, advertisers would not be doing it.