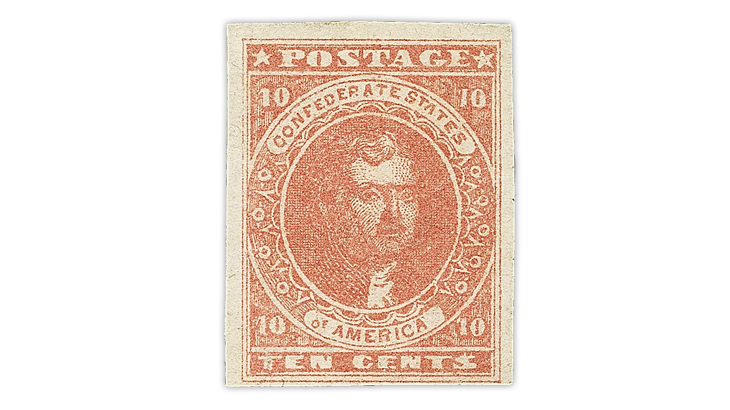 The Confederate States of America was established Feb. 8, 1861, in Montgomery, Ala. The seven original states of Alabama, Florida, Georgia, Louisiana, Mississippi, South Carolina and Texas were eventually joined by Arkansas, North Carolina, Tennessee and Virginia.

The Confederacy came to an end May 9, 1865, after four years of bloody Civil War in which about 620,000 Americans died. Many hundreds of thousands more were wounded and maimed. Union victory in the war left the United States intact, if not exactly reunited, and brought about the end of slavery in the United States.

During its brief existence, the Confederacy produced 14 general issue postage stamps, although one, the 1¢ orange John C. Calhoun stamp (Scott 14) was never placed in use.

The stamp is surprisingly elusive in very fine grade and used condition, and it is a very good buy at the Scott catalog value of $400. Even decent appearing four-margin examples with small faults bring a high percentage of catalog value.