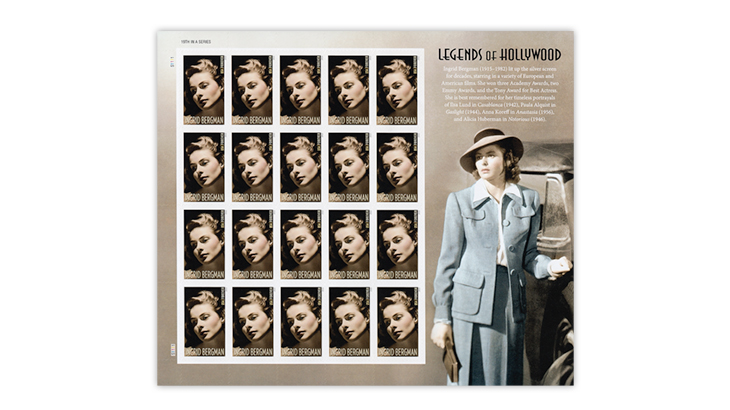 The Legends of Hollywood is one of the most popular U.S. Postal Service stamp series. It began in 1995 with the 32¢ Marilyn Monroe stamp (Scott 2967) and continued through 2016 with the nondenominated Shirley Temple forever stamp (5060).

All of the stamps in the Legends of Hollywood series were issued in panes of 20 with pictorial selvage to the right of the stamps, and that is the way they are generally collected. There is little to no demand for single stamps from the panes.

The Swedish actress (1915-1982) starred in many movies and plays in the United States and was the female lead in Casablanca, one of the best-loved movies of all time. She won three Academy Awards, two for best actress and one for best supporting actress.

The Ingrid Bergman stamp sold for 49¢ when issued. And, like all first-class class postage forever stamps, it has a current postage value of 55¢. Also, as with most recent U.S. commemorative stamp panes, this issue was not stocked in depth by most dealers.

The Scott Specialized Catalogue of United States Stamps and Covers values the mint pane of 20 at $30 against a current postage value of $11. There is steady demand for the mint pane in the $20 to $25 price range.

The issue was also sold as uncut press sheets of nine panes in two versions: with die cuts and imperforate. The Scott U.S. Specialized catalog values a mint imperforate pane of 20 at $35, but there is considerably less demand for the imperforate pane.

The stamp was a joint issue with Sweden (Scott 2756-2758), and you can generally pick up the set of the Swedish stamps in mint never-hinged condition at around $9.