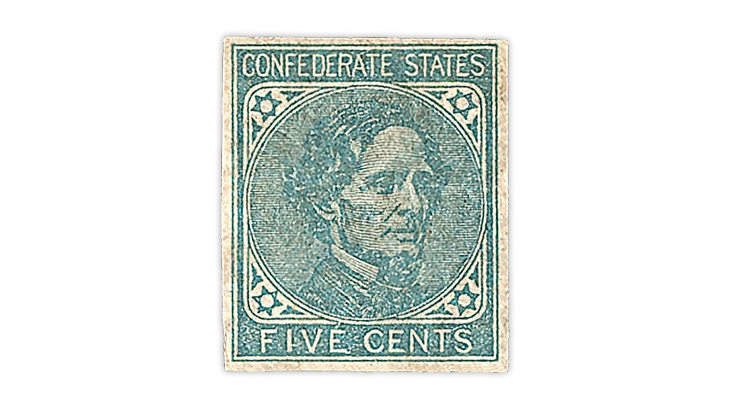 Between 1861 and 1864, the Confederate States of America produced 14 major-number listed stamps, a host of varieties and postmasters’ provisionals. This remains a popular collecting area.

One stamp to look for is the imperforate 5¢ blue Jefferson Davis stamp locally printed by typography on thin to thick paper (Scott 7).

These stamps are a darker blue in color than the 5¢ Jefferson Davis stamps printed in London, England, by De La Rue & Co. (Scott 6).

The locally printed stamps also have a much coarser impression than those printed in England.

The stamps were printed in Richmond, Va., by Archer & Daly in July 1862 from plates made in England by De La Rue. Archer & Daly used paper imported from England and paper produced locally.

In addition to the coarser impressions, the locally produced stamps are duller in color and often blurred. The gum varies from dark to light and is unevenly applied.

The Scott Specialized Catalogue of United States Stamps and Covers values the locally produced stamp at $22 both in unused original gum condition and in used condition. Values are for examples with four margins.

Examples of the stamp in mint never-hinged condition sell for $30 to $50.

Although the catalog value for the locally produced stamp is only slightly higher than for the London-printed stamp, it is much scarcer in original gum condition.

In our opinion, you should avoid the graded 100 examples that sell for $400 or more. More can easily be produced by cutting stamps from existing multiples. Make sure that the stamp you are buying is really Scott 7 and not a poorly printed Scott 6.