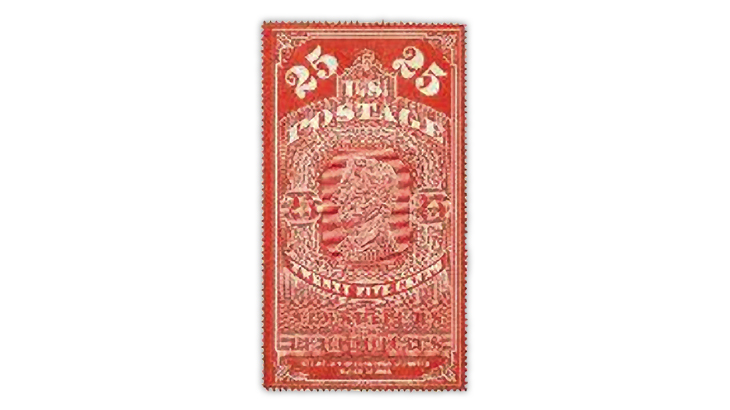 The 1865 United States 25¢ orange red Abraham Lincoln newspaper and periodicals stamp (Scott PR3) is a good buy in very fine grade and unused, no gum condition as issued at around 90 percent of Scott Specialized Catalogue of United States Stamps and Covers value.

The 1865 set of newspaper and periodicals stamps (Scott PR1-PR3) are among the most striking back-of-the-book stamps ever produced by the United States.

Nearly all used examples were canceled by blue brush strokes and have faults such as tears, stains or creases. The scarcity of used examples is reflected in the higher Scott catalog values for used stamps than for stamps in unused, no gum (as issued) condition.

Look for the 25¢ orange red Abraham Lincoln stamp (Scott PR3). The Scott Specialized Catalogue of United States Stamps and Covers values the stamp in unused, no gum (as issued) condition at $400. In very fine grade and without faults, the stamp is a good buy at about 90 percent of Scott catalog value.

These newspaper stamps are large and perforated gauge 12. The most common fault is pulled or nibbed perforations. Stamps with short or missing perforation teeth or with a natural straight edge can be found on offer at 65 percent to 75 percent of Scott catalog value.

Where to start a collection of U.S. Official stamps

Wild and Scenic Rivers mint panes of 12 in demand