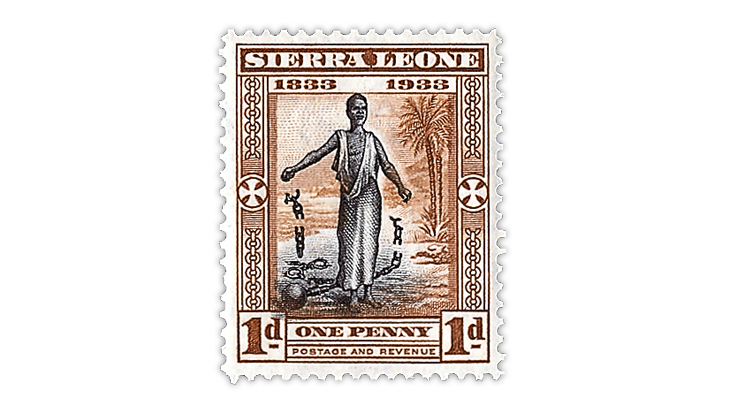 On Oct. 2, 1933, Sierra Leone issued a colorful, engraved set of 13 stamps (Scott 153-165) to commemorate the 100th anniversary of the death of British anti-slavery campaigner William Wilberforce.

Sierra Leone is a former British colony on the southwest coast of West Africa. Nowadays it is mostly known among collectors for having one of the most prolific stamp-issuing programs in the world.

The colony was founded by Great Britain in the late 18th century through the transportation of free Blacks and former slaves from Great Britain and America to Africa.

On Oct. 2, 1933, Sierra Leone issued an attractive and colorful engraved set of 13 stamps (Scott 153-165) to commemorate the 100th anniversary of the death of William Wilberforce (1759-1833) and the abolition of slavery in the British Empire.

Wilberforce, a member of Parliament, was guided by his Christian beliefs to successfully lead the campaign to outlaw slavery in Great Britain in 1807 and throughout the empire in 1833.

The attractive stamp designs include a freed slave throwing off his shackles, a map, local scenes, and an African elephant.

The Scott Classic Specialized Catalogue of Stamps and Covers 1840-1940 values the set at $1,209 in unused, hinged condition and $1,681 in used condition, with the used value in italics.

Short sets of the stamps denominated ½ penny to 2 shillings can generally be found at a reduced percentage of catalog value.

The stamps in unused, hinged condition denominated 5sh, 10sh and £1 are valued at $160, $300 and $650, respectively, and they generally sell at or around Scott catalog value.

Stamps from this set in used condition have higher catalog values than the stamps in unused, hinged condition.

If you are buying this set in used condition, expertization to confirm correct in-period usage is a must.