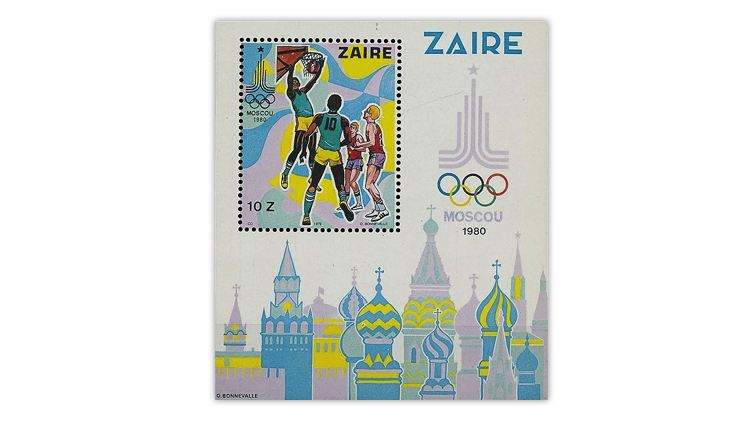 Zaire’s set of nine stamps and a souvenir sheet that was prepared, but not issued, for the 1980 Moscow Olympic Games is a good buy in mint never-hinged condition in the $80 to $100 price range.

The Democratic Republic of the Congo in central Africa has been known by different names throughout history. From 1885 to 1908, it was the private possession of King Leopold II of Belgium and was called the Congo Free State.

In 1960 it gained independence as the Republic of the Congo – Leopoldville. It remained one of the most poorly governed countries in the world. In 1965 a military coup brought Mobutu Sese Seko to power. A corrupt and brutal dictator, he continued in the legacy of King Leopold II, running the country as his private fiefdom.

President Mobutu changed the name of the country to Zaire in 1971. In 1997 Mobutu, who was terminally ill, fled the country, dying in exile three months later.

The name of the country was changed to the Democratic Republic of the Congo, but it remains riddled with corruption and instability.

The Scott Standard Postage Stamp Catalogue continues to list stamps issued after 1997 and bearing the new name under Zaire, perhaps waiting to see how permanent the name change is.

The 1980 Summer Olympics, scheduled to be held in Moscow, were boycotted by much of the world in response to the Soviet Union’s invasion of Afghanistan. Zaire was one of the countries that joined the boycott.

The Scott Standard catalog does not list this stamp set, but it notes and values the nine stamps and souvenir sheet at $140 in mint never-hinged condition.

This set is popular with collectors of the topics of Olympics and sports. The set is a good buy in the $80 to $100 price range.