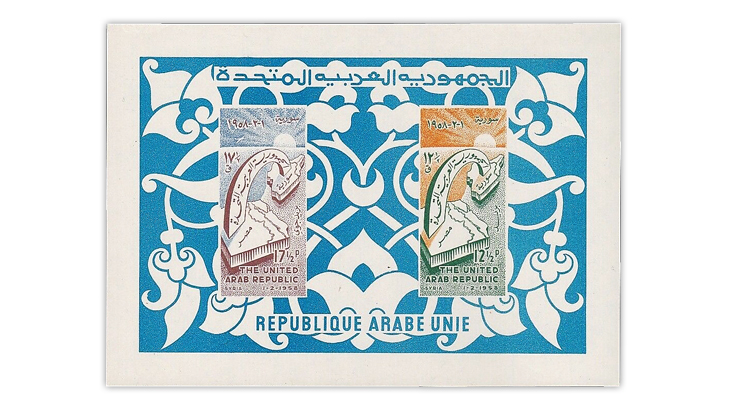 The 1958 Syria – United Arab Republic souvenir sheet of two Linked Maps of Egypt and Syria stamps, which is not listed in the 2020 Scott Standard Postage Stamp Catalogue, is a good buy in the $20-to-$25 price range in mint never-hinged condition.

On Feb. 1, 1958, Syrian President Shukri al-Quwatli and Egyptian President Gamal Abdel Nasser proclaimed the creation of the United Arab Republic with the ultimate goal of full governmental union between Egypt and Syria.

In the Scott Standard Postage Stamp Catalogue, Egyptian issues are numbered in sequence with the rest of the country’s stamps, while Syrian issues are listed following the regular Syrian stamps and have their own numbering sequence.

The first United Arab Republic issue of both countries used a common design depicting a map of part of the Middle East with Egypt and Syria linked by a crescent bearing an inscription in Arabic.

Syria issued two stamps with this design: a 12½p yellow and green postage stamp (Scott 1) and a 17½p ultramarine and brown airmail stamp (C1). The Syrian United Arab Republic also issued an imperforate souvenir sheet of two with both stamps, but the souvenir sheet is not listed, noted or valued in the 2020 Scott Standard catalog.

This souvenir sheet is popular with collectors of both Syria and the United Arab Republic and is a good buy in mint never-hinged condition in the $20-to-$25 price range.