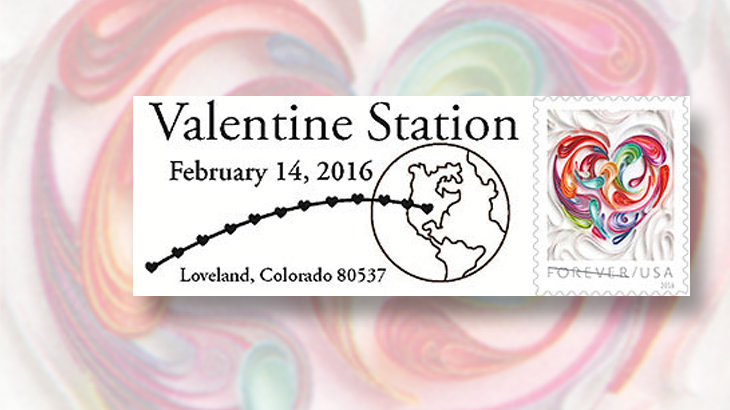 More than 12 million Valentines have passed through Loveland, Colo., since 1947 in order to get the town's signature Valentine's Day postmark. (Image courtesy of United States Postal Service)

A Valentine's Day tradition, the 70-year-old Loveland Valentines remailing program is about to wrap up another busy year.

The program, which was profiled by NPR affiliate KUNC in Colorado last week, takes in mail from all over the world, stamps it with the town's signature Valentine's Day postmark, and sends the mail on to its final destination.

According to a United States Postal Service press release, more than 150,000 cards and letters were stamped and remailed last year in Loveland; they were sent to the town by senders who wanted their mail to carry the Valentine postmark. Items to be stamped came to Loveland from more than 110 countries and all 50 states.

Since 1947, according to the U.S. Postal Service, more than 12 million Valentines have passed through Loveland.

Who exactly are the people behind the program?

KUNC introduced its readers to a few of the volunteers.

2. Latest from the USPS

There has been no official confirmation about whether or not there will be a first-day ceremony.

3. Year of The Monkey stamp issued

The 2016 Year of the Monkey stamp was celebrated during a first-day ceremony on Feb. 5. Wayne Chen was there.