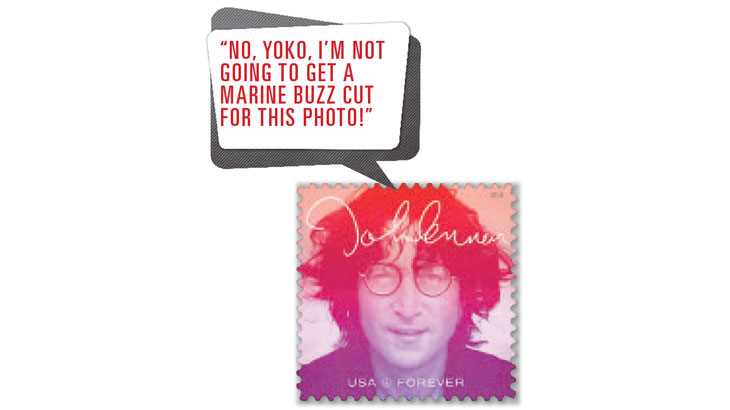 The January cartoon caption contest stamp featured this John Lennon forever stamp, one of four issued Sept. 7, 2018, in four distinct color varieties. The winner of the nonphilatelic part of the contest is Woody Peele of Winterville, N.C., who noted Lenno

This stamp drew the least entries of any contest since they began in 1986. Is it possible that there are few Beatles fans among stamp collectors? Or can it be that there are many people as annoyed by these psychedelic-colored forever stamps from 2018 as I am?

The most common theme of the entries was Lennon’s 1971 song Imagine. The second most popular theme was Lennon’s hair.

Gordon Trotter of Sarasota, Fla., combined the two with “Imagine … I think my hair is on fire!” referring to the orange version of the stamp.

The winner in the philatelic part of the contest is sheer poetry submitted by Ted Feldstein of Doylestown, Pa.:

“IMAGINE there’s no junk mail / It’s easy if you try / I’m now on four stamps / So go to the post office and buy.”

On the nonphilatelic side, the winner is Woody Peele of Winterville, N.C.

“Sorry, Mom, the dealer wouldn’t buy my stamp collection so the band and I are going to take that gig in Germany,” by Bill Cook of Claverack, N.Y.

“Has your stamp advisory committee run out of American subjects for stamps?” by Marvin Levine of Appleton, Wis.

“That’s the last time I forget to use my hair conditioner!” from Steve Kotler of San Francisco, Calif.

“The British are coming, and our songs are revolutionary!” by Bill Bronk of East Green-bush, N.Y.

The next contest will be announced in the March 11 issue of Linn’s.