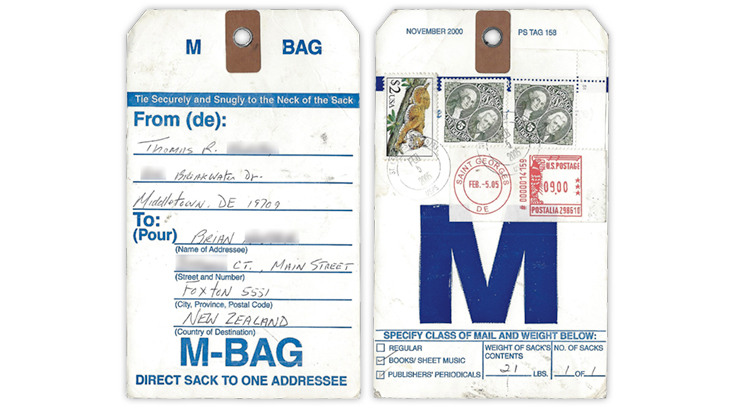 This Feb. 5, 2005, M-Bag tag was attached to a sack of printed matter that weighed 21 pounds, shipped by mail from the United States to New Zealand. A combination of adhesive stamps and metered postage paid the correct $21 rate.

Covering the World by Ken Lawrence

High-denomination postage stamps are not often needed to pay postage on letters, but they are routinely found on M-Bag mail, a convenient way to send heavy quantities of publishers’ periodicals, books, sheet music, other kinds of printed matter and related materials in one mail sack to a single addressee in a foreign country.

Both sides of an M-Bag tag are illustrated here. It was attached to a sack mailed Feb. 5, 2005, from St. Georges, Del., to Foxton, New Zealand.

In 2005 the surface rate of postage to New Zealand for an M-Bag that contained books, sheet music or publishers’ periodicals, or a combination of them, was $11 for a minimum sack that weighed up to 11 pounds, plus $1 for each additional pound. In this case, it was a 21-pound sack for $21.

Postage affixed to the tag consists of one $2 Bobcat stamp (Scott 2482) and two $5 George Washington and Andrew Jackson stamps (2592) plus a $9 postage meter label.

The service became effective April 1, 1959, after having been proposed and adopted by the 1957 Universal Postal Union congress at Ottawa, Ontario, Canada. The April 16, 1959, Postal Bulletin carried the following announcement:

“Direct Sacks of Prints. Publishers and newsdealers may prepare direct sacks containing ordinary (unregistered) packages of books or other printed matter when they have a minimum of 30 pounds of matter for one addressee.”

Over time, weight minimums were reduced, and eventually they were replaced by a minimum-weight rate. Limitations to publishers and newsdealers were lifted. But the maximum rate was and still is 66 pounds, including the tare (the empty weight of the sack).

Effective May 17, 1984, use of the Postal Service tag (PS TAG 158) superseded a simple manuscript “M” endorsement to designate the service.