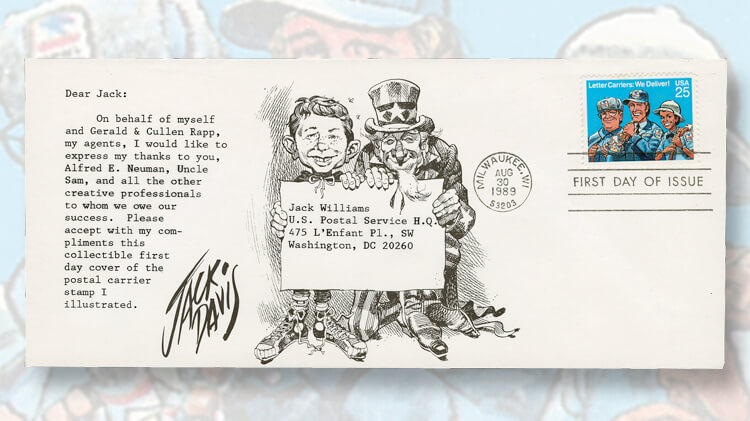 Not your ordinary first-day cover of the 1989 25¢ Letter Carriers commemorative, this example bears a message from Jack Davis, credited as the designer of the stamp, to Jack Williams, his United States Postal Service collaborator.

As an unabashed fan of Mad magazine in my teenage years, I later discovered a philatelic connection in the form of a 25¢ United States stamp designed by Jack Davis (1924-2016), who was one of the founders of Mad in 1952.

Davis remained a member of the Mad staff, which was billed by the magazine as “The usual gang of idiots,” for several decades.

In addition to his illustrations for Mad, including the iconic Alfred E. Neuman, Davis worked on many other projects. Among them was the 1989 25¢ Letter Carriers stamp (Scott 2420) featuring figures of smiling delivery personnel in three different uniforms.

It‘s an attractive stamp, and one that leaves one to wonder if Davis had a premonition. Over 10 years later, a new administration would come to power in Washington, D.C., and the figures on the stamp resemble three of its principals: from left to right, Vice President Dick Cheney, President George W. Bush, and Secretary of State Condoleezza Rice. Is this just an example of life caught in the act of rhyming?

My friend the late Jack Williams was the head of stamp development at the U.S. Postal Service when the stamp subject was approved, and he worked with Davis on the concept and final art.

The cover shown nearby was Davis’ thank-you to Williams, who gave it to me just before his untimely passing.

Davis recently passed away on July 27 at age 91.

How souvenirs were once sent through the mail